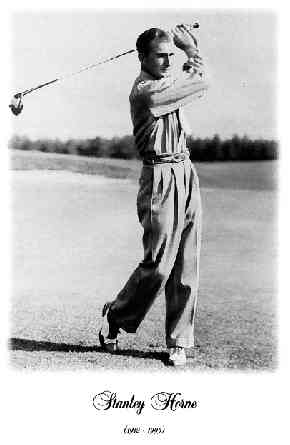 Stan Horne, considered one of Canada’s first homebred professional golf stars during the 1930’s and 40’s, was regarded as a pioneer of the game.

During Horne’s stellar career, he epitomized the role of a club professional. He was recognized as one of the fiercest competitors in the country, whose brilliant play made him a force to be reckoned with across North America. His friendly and ever-obliging demeanor to his members was inspirational to some 33 assistants who studied under his tutelage.

Born in England in 1912, Horne’s family moved to Fonthill, Ontario when he was just 6 months old. His father was greens keeper at the Lookout Point Golf Club where his auspicious career began as a caddy.

Horne won his first amateur title at 12 years-old capturing the Ontario Junior Boys championship. Three years later, he won his first club championship at Fonthill and in 1929, he started his professional career tallying up a long list of triumphs.

Horne apprenticed under Fonthill’s renowned golf teacher Art Keeling and his performance in Ontario tournaments earned him the position as playing professional at the Ottawa Hunt Golf Club from 1936-1938.

In 1939, Horne moved to the Islesmere Golf Club. After 29 years, he left Islesmere to fulfill a dream of co-designing and supervising the building of the Nun’s Island golf course. He remained at Nun’s Island until his retirement.

Highlights of Horne’s triumphs include:

·Twice won the Rivermead Cup as low Canadian at the Canadian Open, sharing the title in 1937 and winning it outright in 1939

During his lifetime, Horne also experienced other thrilling moments including: the 1937 Miami Open, when he led the field after two rounds only to finish third behind winner Sam Snead who fired two successive 66s to overtake him; representing Canada in the International four-ball matches at the Miami Biltmore in 1939, teaming up with Jules Huot to beat Ben Hogan and Lawson Little; competing in the first International Matches for the Hopkin’s Trophy in 1952 at Beaconsfield Golf Club (the Hopkin’s Trophy was the fore-runner to the Canada Cup and is now known as the World Cup).

Horne also holds the world record for the lowest score over nine holes with an unbelievable nine under-par 26 at the Dubsdread course in Orlando, Florida in 1946. It came during a round that preceded the start of the Orlando Open. His playing partners at the time were Jules Huot , Ed Furgol and the host pro Denis Champagne.