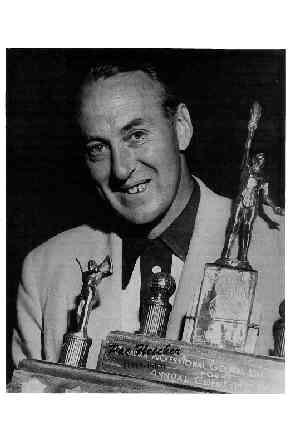 The late Pat Fletcher was a quiet and courteous man who walked among the titans of the game, including the likes of Jack Nicklaus, Arnold Palmer and Lee Trevino, who called him friend. His legendary tenacity as a competitor along with his skill as a club pro fitted well with that of the Royal Montreal Golf Club where he roamed the fairways as pro for nearly 20 years.

Fletcher, born June 18, 1916, was a son of a dentist. In 1920, the family emigrated from Clacton-On-Sea, England to Victoria, BC where he was introduced to the game through caddying. Club-pro Phil Taylor look an interest in Fletcher and let him use his clubs.

Fletcher’s skills as a player first showed itself when he won the Gorge Vale junior championship, his one and only amateur title. The country was in the midst of the “great Depression” and many young caddies continued to work past their 19th birthdays, automatically becoming professionals under the rules of the game at the time.

In 1935, he worked as second-assistant at Jasper Park Golf Club. That same year, he played his first professional event, the Alberta Open at the Edmonton Golf and Country Club. After scurrying to find the finances to make the trip, selling $5 shares in himself to his fellow caddies at the club, Fletcher was leading the event after 63-holes.

“I’ll never forget it as long as I live”, said Fletcher in an article published in 1979. “I remember walking down the 64th fairway trying to decide how I was going to spend all the money I was going to make, than I took a double and wound up losing by a stroke. I learned you can’t take anything for granted”.

His success earned him a job as first-assistant at the Mayfair Golf Club where he remained for five years. It was during this time that he met Dorothy Fraser of Edmonton, and the two were married July 19, 1939. For the 1941 and 1942 seasons, he held the post as both Pro and Manager at the Edmonton Golf and Country Club before accepting the professional position at the Highlands Golf Club in Edmonton. Then, in 1946, he made his way to the Saskatoon Golf and Country Club for a ten-year stint, where his skills as a player really came to the fore.

Fletcher was by self-admission not a long hitter, but in the days when tournament officials would allow the rough to grow snarly and long, a premium was paid to those players who could keep it in the fairway. In this respect there were few better than Fletcher. He was regarded as one of the most proficient and accurate wedge players in the game.

There were also numerous smaller events that Fletcher captured throughout his career as well as competing for Canada in four international team matches for the Hopkins Trophy and the Canada Cup (the forerunner to today’s World Cup).

But the crown that Pat Fletcher wore so eminently was that of the 1954 Canadian Open champion – the only Canadian to have captured the event between 1914 and today. The victory came at the Point Grey Golf and Country Club in Vancouver, BC.

It was as if destiny had driven him to the top. During the second round of the 1952 Open at the St. Charles Country Club in Winnipeg, Fletcher soared up the leader board with six birdies and a hole-in-one in the first seven holes to finish the front side with a 29, despite a three-putt bogey at the 9th hole. The following year, he earned the Rivermead Cup as low Canadian at the Scarborough Golf Club in the 1953 Canadian Open, where he finished only four shots back.

In 1956, Fletcher moved to the Royal Montreal Golf Club. His acceptance of this position marked the virtual end of his competitive golf career at forty years-old and a new beginning of another, that of teacher and administrator.

Fletcher’s administrative prowess first shone through in Saskatoon, having been the driving force in the creation of the Saskatchewan PGA, but his 20 years at Royal Montreal secured his position as dean among golf professionals. Among his many accomplishments: he was the first president of the Québec branch of the CPGA to come from within the club professional ranks; vice-president of the PGA of America; and served as president of the Canadian PGA for three years. He was also inducted into the Saskatchewan (1974) and Canadian Sports Halls of Fame (1975) as well as the RCGA’s Canadian Golf Hall of Fame (1976).

One of the distinguishing characteristics that differentiated Fletcher from others of his day, was his defined priorities including his commitment to family and his golf club. His strong-will and strong-mindedness that made him an accomplished competitor easily carried-over into his dedication to be the consummate club professional. He was also said to possess a devotion to people that once he established a friendship, it was for life.

Players like Jack Nicklaus and Arnold Palmer would often drop in on Fletcher for help with their swings. They had great respect for the man who was considered one of the top instructors in the country. His knowledge of the game and his willingness to impart this knowledge to dedicated students was matched by few. Among the many fine amateur golfers that learned under his tutelage and the one he described as his prize student was Judy Darling-Evans.

When Fletcher retired in 1976, he returned to the area of his youth as a conquering hero, Victoria, B.C. His life had come almost full circle, but in-between his travels from shore to shore, he enriched the country with a legacy that an entire nation could embrace.