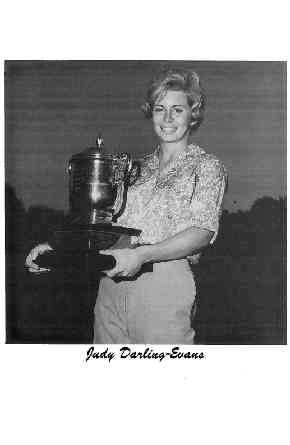 For nearly a decade, the name Judy Darling-Evans was synonymous with success on the competitive golf scene. During that time span, she amassed enough amateur championship crowns to fill a lifetime of dreams and earned the adoration of an entire nation.

The first child of A.B. (Bill) and Dora (nee Virtue), Judy was born on October 6, 1937. The family home was located in the shadows of the Whitlock Golf Club where her grandfather, J.A. Darling, served as the club’s first president and former Québec Amateur champ.

Through the years, the Darling family was an institution at the Whitlock club. Judy’s father, Bill was a fine-amateur of note, winning 11 club titles as well as the Western Canada championship. Her mother, Dora, twice captured the Québec Amateur crown and won the Canadian Ladies Golfing Union Open championship in 1936. Her sister Mary was a three-time Québec junior champion and brother Brian was twice named to the junior inter-provincial team in national competitions and five-time member of the Québec team in matches against Ontario.

Judy first joined the Whitlock club at the age ten, although she had begun swinging a club almost as soon as she could walk. In 1953, her family also held membership in the Royal Montreal Golf Club, although she continued to compete under the Whitlock banner.

It wasn’t long before Judy earned a formidable reputation in the junior ranks. In 1952, at 14 years-old, she finished second in the Québec Junior Girls’ Championship and the following year, 1953, captured her first Québec Junior Girls’ title. Judy’s domination in Québec junior ranks continued with a runner-up finish in 1955, before winning her second of three Junior crowns in 1956. It was at this time, she burst into the national limelight by placing second in the Canadian Ladies’ Junior Championship.

The 1957 season was to be her last as a junior. At 19, the five-foot, blue-eyed, blonde was maturing into both a vivacious beauty as well as one of the premier champions. On the heels of her Québec victory, in 1957, she went out and solidified her place among the province’s elite by capturing the first of five consecutive Québec Ladies’ Amateur crowns (1957-1961), which instantly earned her a place in the annuls of Québec golf by becoming the first woman to win both the Junior and Amateur titles in one year. That same year she came to national prominence by capturing the Canadian Ladies’ Junior crown.

Judy’s domination in the province and her fine showing at the national championships led to her selection for the first women’s golf team competing in the 1959 Commonwealth Games in St. Andrews, Scotland. Her arrival in the four nation event, was met by throngs of enthusiastic crowds and she didn’t disappoint them, assisting greatly by pacing Canada to a second place finish.

For Judy, the highlight of the trip came when the team gained entry into the hallowed halls of the famed St. Andrews clubhouse, but for the fans and the media alike, the highlight was her dramatic sand shot from the famed “Hell Bunker”.

A report of the day read, “To get out of Hell is no mean feat especially for a woman. But for a slip of a girl to hit a shot out of the dreaded “Hell Bunker”, on the St. Andrews “Long Hole I”, the fourteenth, and, what is more , to get the green a hundred yards away with her recovery – is very remarkable”.

Two holes later, again she found herself in a greenside bunker and this time wedged it to a couple of feet of the pin. Her prowess with the short-irons allowed her to reach the epitome of the game.

In 1960, after graduating from McGillUniversity, Judy’s star was rising. She finished as runner-up in the Canadian Ladies’ Close Amateur Championship and followed it with a victory in the Canadian Ladies’ Open Amateur. The Open win was a historical feat, being the first time the daughter of a former champion – her mother won the Open title in 1936 – would have her name inscribed on the Duchess of Connaught Trophy.

Darling-Evans’ stature was now of a national celebrity. There was tremendous media coverage with appearances on local and national radio and television sport shows. It also placed her third in the voting for Canadian Female Athlete of the year.

Demand on her time was at a premium. As national champion she competed in the “Beat the Champ” competition – fund raising event in support of junior golf development – and traveled to various courses to “test Par” for the CLGA.

Yet, Darling-Evans’ best season was still to come.

In 1961, she amassed her record fifth consecutive Québec Ladies’ Amateur title and went on to successfully defend her Canadian Ladies’ Open Amateur Championship crown. Again, she was nominated for Canadian Female Athlete of the year, but finished a close second in the balloting. It was also the year she wed Douglas Evans.

Darling-Evans now found little time to compete. During the Québec team trials she officially announced that she would not be traveling to Winnipeg to defend her Open title or her Québec Ladies’ Amateur title.

The summer of 1962 brought joy of a different nature when it was discovered she was pregnant with her first child. Golf was now a diversion from real life for the expectant mother.

Eight months after her daughter Katherine was born, Darling-Evans accepted the invitation to play for Canada in the 1963 Commonwealth matches in Australia. Despite taking almost a year off, she performed valiantly in Canada’s losing effort.

Those Commonwealth matches were to be her last hurrah as a competitor from the Whitlock Golf Club. The same devotion she’d displayed for nearly ten years to the game was redirected toward family life.

Competitive golf made way to the more sociable game as her family grew to include four children, Katherine (born in 1962), Cynthia (1964), Tracey (1967), and Daphne (1969). In 1970, she rejoined Royal Montreal Golf Club and two years later entered the Québec Ladies’ Amateur Championship. Although she had spent nearly a decade on the sidelines, she showed the same flare for the game by capturing her sixth Amateur title in 1972.

Judy also can count a win at the 1988 Québec Senior Ladies’ Amateur and a runner-up finish in the 1989 event. Although, not to disregard these more recent achievements, her entry into the Hall is indicative of the decade in golf history when there was no-one better than Judy Darling-Evans, Canada’s and Québec’s queen of the fairways.