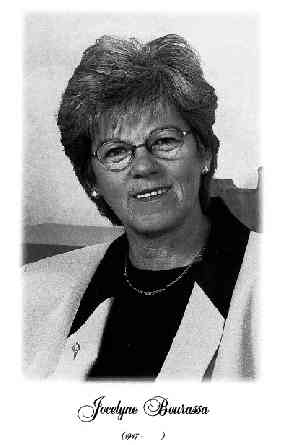 Few in the history of golf have fostered as much respect as Jocelyne Bourassa, the renowned Executive Director of the Du Maurier Classic – one of the four major championships on the Ladies Professional Golf Association’s Tour. Her untiring dedication to the game has made great strides particularly regarding Canadian women’s professional golf.

But, long before she was forced into the corporate world through injuries, the Shawinigan-Sud native, born May 30, 1947, had established herself as one of the premiere amateurs and professionals in this country.

The Université de Montréal graduate, who played on the men’s golf team since there was no women’s team, was also successful nationally, capturing two Canadian Open Championship crowns (1965 and 1971) and a runner-up prize in 1968. Internationally, she won the Scottish Girls title (Scotland, 1967) as well as the New Zealand amateur crown (1971) and was a member of Canadian teams that completed in the 1970 World Championships and the 1971 Commonwealth Matches.

After turning professional in 1972, Bourassa first tweaked people’s interest by tying Kathy Whitworth for the 1972 Southgate Open, only to lose in a play-off. That same year she earned the titles as the LPGA Rookie of the Year and voted All-American Most Colorful Player of the LPGA Tour.

The following year, in front of a hometown crowd at the Montréal Municipal Golf Club, Bourassa surprised everyone with an unexpected playoff victory over Tour veterans Sandra Haynie and Judy Rankin in the “La Canadienne” – the forerunner to the Du Maurier Classic.

By the time the LPGA Tour gave recognition to the Classic as a major championship in 1979, Bourassa, who twice in her illustrious eight year career on LPGA Tour ranked in the top 20 on the money list (1972 and 1975), faced surgery for a third time on knees that plagued her for much of her pro golf career, retired.

While her competitive career might have ended, it didn’t halt Bourassa’s devotion to the game. Using the knowledge from her personal experience, she was instrumental in the establishment of the only made in Canada mini-tour for Canadian professional women golfers, the Du Maurier Series.

Since its inception, the Series, outside of the actual competitions, has taken on a persona all its own. It now delves into the realm of teaching by providing training clinics and speaking seminars as well as paving the way for more Canadian women to compete in the world of golf.

Over the years, Bourassa has received many honors, including: the Royal Order of Merit of Canada (1972); French Canadian Athlete of the Year, twice (as an amateur in 1971 and a professional in 1972); the Canadian Woman Athlete of the Year (1972); elected to the Québec Sports Hall of Fame (1992); inducted into the Canadian Golf Hall of Fame (1996) and became the first woman to earn the Distinguished Service Award from the Québec Golf Course Superintendents Association (1996).