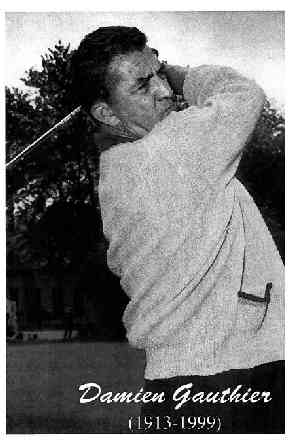 Mr. Damien Gauthier was the renowned professional of the former Montréal Municipal Golf Club whose success came somewhat in response to his father’s dire warnings of the 1920’s, that he would “starve to death” if he chose to pursue a career in the world of golf.

Mr. Gauthier’s achievements go deeper than the many championships he won, course records set, or lives he touched as an administrator, teacher and ambassador of the game over his long and distinguished career of some 60 years. His story is testimony to the satisfaction that comes from living life to the fullest and the fulfillment of your dreams.

Born in Montebello (Québec) on December 27, 1913, Mr. Gauthier’s love for the game was nurtured as he went from caddy, to caddy master, to assistant professional, to one of the most consummate professional of his day.

Mr. Gauthier was only 16 years-old when he apprenticed under Cal Taylor at the prestigious Seignory Club, presently known as the Château Montebello. In 1936, he was hired as the head pro of the now defunct St. Jérôme Golf Club, where he remained until its closure in 1943. While the demise of the golf club was a heart wrenching episode in the lives of both Mr. Gauthier and his wife, it would soon prove to be a pivotal event in the legacy he forged.

The Montréal Municipal Golf Club was in need of a head pro, while Mr. Gauthier was in need of a job. It wasn’t long before the reputation of each would become inseparable. For some three and a half decades, Mr. Gauthier served the insatiable golfing public at Municipal – in its hay-day some 90,000 rounds were played over the 36-hole course per year.

Although he showed promise as a young player by winning twice before leaving St. Jérôme – including the 1937 Montréal PGA Championship at the Rosemère Golf Club – Mr. Gauthier’s skills as a competitor took on its razor sharp edge during his tenure at Montréal Municipal, this despite a high demand for lessons and a thriving pro-shop operation.

Mr. Gauthier was so strong a competitor earning a reputation for his unfaltering swing from tee to green that he merited the nickname “Damien the Machine”. And when age was factored in his ability to hit the long ball, his expertise with the short irons and putter more than compensated to wrest championship titles from many competitors half his age.

A notable administrator, he mentored over twenty assistants who would go on to forge careers as head-professionals of their own. Mr. Gauthier served as pro-manager (1955-1970), and as the general manager (1970-1978) at the Montréal Municipal Golf Club.

In this capacity, Mr. Gauthier served as a fine ambassador of the game entertaining celebrities and guests from all walks of life while enhancing his international reputation. It also led to his being asked to submit an instructional article for publication in the June 1967 issue of the American magazine “Golf Digest”.

Among his many achievements, a highlight in his career came from the tremendous response to his redesign of the municipal course for the 1967 Canadian Open.

Jack Tuthill, the Professional Golf Association of America tournament advisor, was very enthusiastic about the course and the precision shots that would be required to score well. He was also impressed by the greens which he described as not large but a fair test for the best players in the world.

The “Muni” course and Mr. Gauthier added to their reputations by playing host to the 1973 “La Canadienne”, the fore-runner to the Du Maurier Classic, won by Hall of Famer, Jocelyne Bourassa. Other courses he designed or redesigned include the second 18-holes course at Montréal Municipal, the first 9-holes at St. François, some holes at the New Glasgow and the GreenValley golf courses, plus the par-3 course at Montréal Municipal. He also designed a course to be located in Rivière-des-Prairies that was to become the new Montréal Municipal course, but it was never built.

The closing of the Municipal course to make room for the Olympic Village was one of the most heart wrenching moments in his illustrious career.

Gone was one of the most recognized institutions that many Québec parents relied upon to outfil their children in the world of golf equipment. The pro-shop he had nurtured was son highly respected that his peers in the Québec PGA created an awart in his honor, “The Damien Gauthier Trophy”, for the assistant who best demonstrated handling of the over-all operations of a pro-shop.

While his prominence in the world of golf is what the public so readily recognized, his greatest personal accomplishments didn’t take place anywhere near a golf course. It was in raising and educating four successful children, a doctor, a lawyer, a Ph.D. in history, a successful businessman, and a marriage that lasted over 55 years.

Golf was good for Mr. Gauthier, keeping him out of the bread-lines his father predicted, but the game has also benefited by his many contributions.