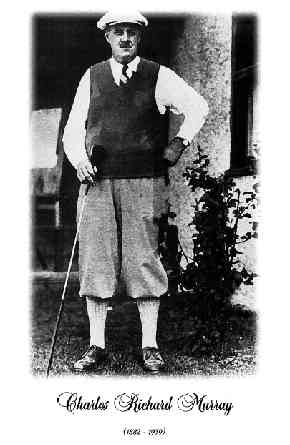 Although he was born in Birmingham, EnglandAugust 27, 1882, C.R. (Charlies) Murray learned his craft of Canadian soil and was one of Canada’s greatest professional golfers, and his contribution to the game goes beyond his tournament record.

Murray became a full fledged pro in 1902 being engaged by the Toronto Hunt Golf Club. The following year, he came to Montréal and for two seasons worked as the head professional at the old Westmount Golf Club. In 1905, he began his thirty-three year association with the Royal Montreal Golf Club.

Through Murray’s hight standards of golf sportsmanship and skill, as well as his deportment and courtesy in his relationship with club members, he was credited with contributing to the club’s outstanding reputation. The members of Royal Montreal so fondly regarded him, that upon his completion of a quarter century of service they awarded him an honorary life membership.

Murray, the dean of the Montréal district professionals, was highly regarded as both a player and a club professional which enhanced his popularity across North America. This led to his selection in 1924 as the head professional at the prestigious Gulf Stream Golf Club in Florida and for some ten years, his routine was to summer at Royal Montreal and winter in Florida.

Despite his years as a club professional, Murray’s keen spirit for competition never waned. This was often facilitated by the many top players, including the likes of Britain’s Ted Ray, the immortal Harry Vardon, and 1932 British Open champion Tommy Armour, who would drop in at Royal Montreal and Gulf Stream for a match.

Among his many accomplishments include:

·The winner of the inaugural Canadian Professional Golfers’ Association Championship in 1912 and runner-up in the 1922 CPGA Championship.

·Captained a team of Canadian professionals in an exhibition match against the 1927 British Ryder Cup team.

Murray, similar to others of his time, also had a hand in the shaping of many area clubs, for example: co-designing with his younger brother Albert the layout at Kanawaki and Whitlock golf clubs. He is also credited with “stiffening” the Royal Montreal’s old Dixie course in Dorval for the 1926 Canadian Open, “dropping traps in by the droves and bringing the South Course into the realm of one of Canada’s most exciting and testing layouts”.

Upon his death in 1939, it was reported, “the Royal and Ancient pastime suffers an irreparable loss”. Murray was just 57 years old.