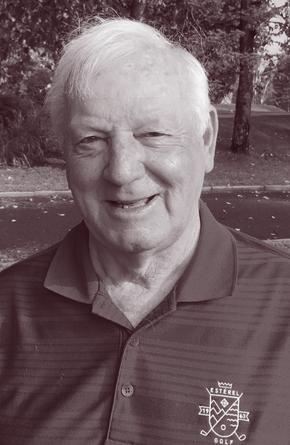 Mr. Ross was elected to the Québec Golf Hall of Fame in the Builder category.

A native of Lachine, Québec, Mr. Ross’ first love was hockey, playing with the Lachine Maroons in the era of Cournoyer, Lemaire, St. Onge, and then earning a scholarship to St. Lawrence University, Canton, New York, where he captained both the hockey and golf teams and received his B.A. in 1967.

Golf won over hockey, and after serving as an Assistant at Royal Montreal, Summerlea and Rosemère, Ross became the Head Professional at Candiac, 1972, and later l’Estérel, 1981-2001. A well-deserved break in 2002, and then the Coordinator of the Future Links program for Golf Québec from 2003-05. He then returned as Head Professional at Gowan Brae (Bathurst, NB), Miramichi, (NB), The Falcon, (Hudson), Mactaquac, (Fredericton, NB), and then back to Estérel 2014-21.

Recognized for his outstanding contributions to golf development, Mr. Ross received the award for the Professional who has contributed the Most for the Advancement of Golf in Québec, twice- 1998 and 2006. He was the originator, host and directed the First and Only All-Female ‘Ladies Pro-Am’ in Canada, proudly working with his immediate Committee of Jocelyne Bourassa and Mario Brisebois (both Québec golf hall of famers), from 1989-1999, starting with 13 teams and a purse of $6,000 and ending with 35 teams and a record $55,000 purse for a one-day tournament. Professionals participating in the Estérel Pro-Am and Guess Tournament included Québec golf inductees Debbie Savoy Morel and Mary Lee Cobick as well as LPGA legends Lorie Kane and Nancy Harvey, Terry Brecher and Linda Shepherd.

Mr. Ross was also awarded the prestigious Pierre-Nadon Award (2016) from Golf Québec for his 50 years of career, passion and dedication to the game of golf.

Completing the public service record was co-founding the Irish Open (1984-2000) with Paul Sowney, with proceeds to the Erin Sports Club.