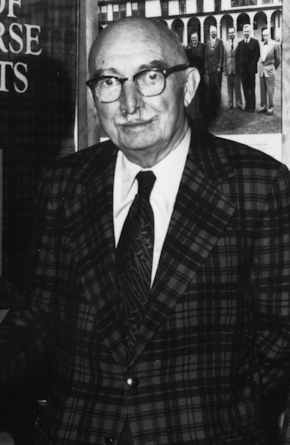 Born in Dresden, Ontario, in 1907, Howard Watson was a renowned golf course architect who designed over 150 courses in Ontario, the United States, Colombia, and Jamaica. However, his greatest contribution was the 67 courses in Québec including Carling Lake, Pinegrove, Joliette, Islesmere, Royal Québec, Hillsdale-Laurentian, Cedarbrook, and Cap-Rouge, to name a few. In 1974, he also oversaw the modifications to the Candiac Golf Club to prepare for the DuMaurier Classic.

After receiving a degree in agriculture from the University of Toronto with a specialty in soil biology, in 1929, he spent the next two years learning, as the principal associate, from Stanley Thompson. His first solo design came in 1933 when he built 9 holes in Seaforth, Ontario. In the 1930s and 40s, he worked closely with Robert Trent Jones, who had also joined Thompson's team and with whom he shared a distinctive course design strategy recognizable for characteristic large greens and bunkers.

During the Depression and Second World War, he was a superintendent, turf consultant and engineer, as a Major, in the Canadian Army. After the war, he and his wife Betty moved to Québec, more specifically to Lachute. There, in collaboration with Thompson and at the request of young industrialist Gilbert Ayers, he designed a golf course just outside the city. It was at that location, which would one day feature two courses, that Howard Watson conducted his experiments to develop a subterranean irrigation system on two greens to provide for watering without interrupting play and had his design office in a distinctive home on the 18th green of the Member’s course.

President of the American Society of Golf Course Architects in 1958-59, he was a member of the Canadian Golf Superintendents' Association for 38 years and counted other renowned architects such as Graham Cooke and John Watson among his apprentices. Quiet and very private, he was known for his work as a superintendent and for his research on turf maintenance. He passed away in 1992 and was nominated this year for induction into the Québec Golf Hall of Fame as an industry builder.