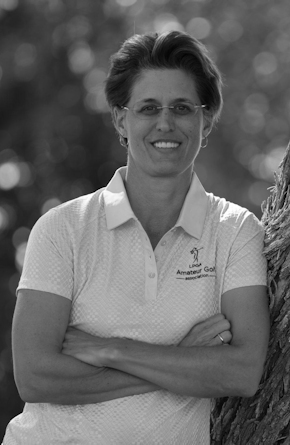 Born in Amos, Ms. Cobick has had a distinguished career in the amateur ranks and continues to do so as a professional and a teacher. From 1978 to 1987, she dominated the women's amateur scene before being promoted to Canada's National Team from 1988 to 1993. Ms. Cobick was a scholarship student at Florida State University from 1988 to 1992 and then joined the Symetra and Canadian Tours from 1995 to 2002 where she won three times. Since 1995, she has been a member of the PGA of Canada as a professional and a teacher. She has also been a member of the LPGA in the same capacity since 1997. Ms. Cobick has had a remarkable influence as a teacher, business owner, and junior golf foundation leader both at the Club de golf l'Oiselet d'Amos and in Florida. In 2018, she won the LPGA National Professional of the Year and the LPGA's Top 50 Teacher awards. She is now Vice-President of the LPGA Foundation. She oversees three programs: the LPGA-USGA Girls Golf, the amateur component and the teaching division, in which she manages the certification of future instructors. Her contribution as an exemplary teacher and professional has influenced more than a generation of young men and women in the game of golf. Ms. Cobick is elected to the Québec Golf Hall of Fame in the builder category.