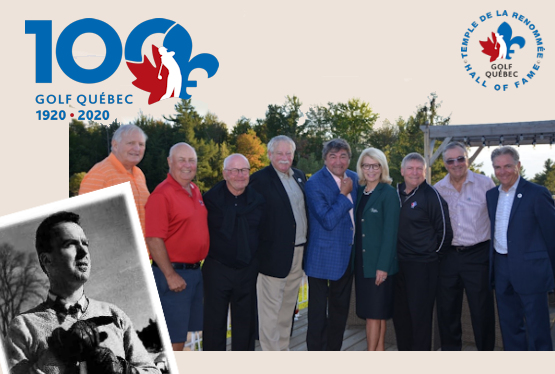 In the first part of this chronicle, we told you about these legends of amateur and professional golf. We now invite you to discover our builders and the volunteers who have shaped the Québec Golf Federation.

At the builder level, the Hall of Fame has welcomed a club designer, an administrator and referee, a reporter, and a general manager.

In 2017, the Hall of Fame welcomed its member who is probably the most famous world-wide. Indeed, who hasn't already had one of the famous Vokey wedges in their bag, the work of Robert "Bob" Vokey (1939 - )? Born in Montréal, Bob Vokey grew up in Verdun before going to California to practice his art. One of the world's most renowned wedge designers, he has equipped many champions including Seve Ballesteros, Phil Mickelson, Tiger Woods, Rory McIlroy and Mike Weir, to name just a few.

Still an active volunteer with golf associations, Me Jacques Nols (1945 - ) is a true world leader in terms of golf rules. He was a referee in 19 Canadian Opens, the Masters, the American and British Opens, the World Amateur Championship, the 2007 Presidents Cup and many other amateur championships in Canada. In addition to his extensive officiating record, he also served as President of the AGQ in 1986 and of the Royal Canadian Golf Association (now Golf Canada) in 1995.

Although he started his golf career successfully by representing Québec in the prestigious junior competition for the Williamson Cup played in 1970 at the Aronimink Golf Club in Philadelphia, and by being Jocelyne Bourassa's caddie during her historic victory in Montréal in 1973, it is as a sports columnist that Mario Brisebois (1953 - ) has continued to leave his mark on the world of golf in the Mauricie area, Québec and Canada for more than 45 years. In his career as a reporter, Mario devoted himself more particularly to golf, tennis and skiing and he always made a point of taking an interest in all aspects of the sports he covered, with respect and professionalism. Mario has always been committed to supporting the next generation of Québec athletes, and many of them have benefited from his exceptional coverage throughout their athletic development.

Christopher Howard Gribbin (1921 - 2012) was hired as the first Executive Director of the QGA in 1966. An excellent director with a charming personality, Mr. Gribbin's contribution to the development and promotion of golf in the Québec community remains unparalleled with the implementation of numerous initiatives, particularly in the areas of bilingualism, juniors, rules, tournaments, marketing and administration.

Following his retirement in 1989, he was succeeded by his son Phil. Then came Bob Dion in the early 2000s before the current Executive Director, Jean-Pierre Beaulieu, who has been in the position since 2007. With only four general managers in over 50 years, the association has demonstrated stability, which has allowed it to develop to the point where it was elected Québec Sports Federation of the Year in 2014.

Over 250 Volunteers in Québec

The success of sports organizations generally relies on the commitment and dedication of its volunteers, and golf is no exception with more than 250 volunteers working in the eight regional associations covering all of Québec and part of eastern Ontario in the Ottawa Valley region.

With time, in order to honour the contribution of invaluable volunteers, both Golf Québec and Golf Canada introduced the Volunteer of the Year Award. At the Canadian level, among the recipients of the past few years, are Québec’s own Sylvain Tremblay (Saguenay/Lac St-Jean/Chibougamau/Côte-Nord, 2010), Diane Barabé (Eastern Townships, 2014) and Raymonde Michaud (Lower St. Lawrence, 2018).

Under the chairmanship of Mr. Marc Tremblay, the Québec Golf Hall of Fame Committee has announced the induction of two builders and one professional for the year 2020.

In this centennial year, it was fitting to honour the man who literally presided over the first steps of golf in Canada, the Scotsman Alexander Dennistoun (1821-1895), who founded the first club in North America, the Montreal Golf Club in 1873.

On the women's side, in addition to having a prolific competitive career between 1978 and 2002, Mary-Lee Cobick (1970 - ) entered the Hall of Fame in the builder category. She had a remarkable influence as a teacher, owner manager and leader of the junior golf foundation at the Oiselet d'Amos Golf Club and in Florida. In 2018, she was recognized as LPGA National Professional of the Year and received the LPGA's Top 50 Teacher award.

On the professional side, the committee selected Doran "Duke" Doucet (1947 - ). Originally from Windsor, Québec, the man affectionately known as Duke has been a prominent figure in the history of Québec golf for over 50 years, winning over 35 professional tournaments including the Québec Open and three Spring Opens. He also had a long career as a professional at Summerlea Golf and Country Club from 1976 to 2011.

In closing this series of 10 chronicles on the history of Golf Québec, I would be remiss if I didn't mention the contribution of those who made my job the most enjoyable. First of all, two golf history enthusiasts collaborated on some of the columns: Joe McLean, a columnist for Flagstick magazine and historian for the Ottawa Valley Golf Association (OVGA), and Alain Chaput, a golf enthusiast to whom I hope to one day publish his own book on the history of golf in Québec. I thank them for sharing some of their knowledge with us.

These columns would not have been possible without the coordination and patience of my editor and translator: Communications Manager Guylaine Sirois, who is also the most senior employee of Golf Québec, in office since 1998.

Many thanks also to Meggan Gardner, the Director of Heritage Services at Golf Canada who added her voice to validate some of the facts we reported. If you ever visit the Toronto area, do not forget to visit the Canadian Golf Museum and Hall of Fame in Oakville, on the fairways of the Glen Abbey Golf Club; it's well worth the trip.

I am very grateful to the Golf Québec Centennial Committee for entrusting me with this mandate, which allowed me to discover a new passion for history in this pandemic year: Sonia Houde, Martin Ducharme, Denis Loiselle and Jean-Pierre Beaulieu.

Thank you to all the faithful readers who expressed their comments to me on the courses last summer and my apologies if errors have crept into the texts, I take full responsibility for them.