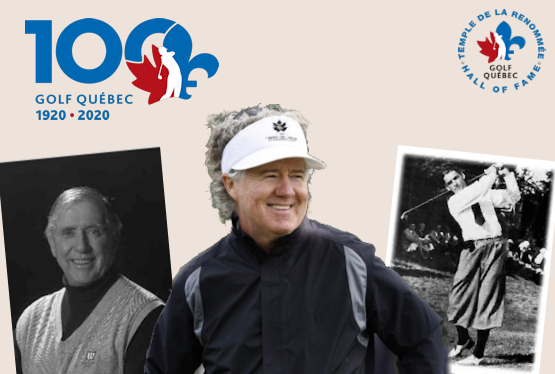 Left to right: Adrien Bigras, Daniel Talbot, and Gordon B. Taylor
In this final issue, what better way to relive Golf Québec's centennial than to take a virtual guided tour of its Hall of Fame and also to honour the builders and volunteers who have shaped the organization.

The Québec Golf Hall of Fame, inaugurated in 1996, was founded by three past presidents of the Québec Golf Association (QGA): Larry Boyle, Maurice Dagenais and Roger Legault. They wanted to pay tribute to Québec players and builders who have distinguished themselves on the provincial, national or international stage.

The Québec Golf Hall of Fame has 33 members if you count the three inductees of 2020. Of this number, four have earned their place thanks to a busy amateur career.

All three were born in the mid-1940s, Pierre Archambault (1944 - ), André Gagné (1944 - ), and Graham Cooke (1946 - ) dominated the competitive stage between the 1960s and today. Archambault has won eight provincial tournaments and one Canadian Championship, and has been part of a Québec team 13 times. As for André Gagné, he claims 13 provincial titles and a victory at the Canadian Senior Championship; he also sat on the Board of Directors of Golf Québec from 1998 to 2008. However, Graham Cooke is unquestionably the most successful amateur golfer in Québec's history, with more than 30 provincial championships and 10 Canadian championships to his credit. In addition, he has left his trademark on several championship courses for which he is the architect.

Three of the professionals who were inducted into the Hall were already active when Golf Québec was founded in 1920. They are: Albert Henri Murray (1887 - 1974), Charles Richard Murray (1882 – 1939), and Karl Kaspar Keffer (1882 - 1955). In fact, all three of them participated in the very first provincial association tournament held on June 18, 1920, at the Country Club and tied for second place after the event's 36 holes. Between them, they combined six titles at the Canadian Open, 12 at the Québec Open, and they designed more than 45 courses.

The next generation was marked by longevity and loyalty for the head professionals to their respective clubs: Jules Huot (1908 - 1999), 25 years at the Club Laval-sur-le-Lac and 3 Québec Open titles; Bill Kerr Sr. (1911 - 1997), in Beaconsfield for 28 years; Stanley Horne (1912 - 1995), 29 years in Islesmere and 8 Québec Open victories; Damien Gauthier (1913 - 1999), 32 years with the Municipal de Montréal, and Pat Fletcher (1916 - 1985), 20 years with the Royal Montreal and two-time Québec Open champion. Fletcher remains the last Canadian to claim the Canadian Open trophy in 1954. Exceptionally, the Hall of Fame welcomed a family in 1996, the eight Huot brothers, of which Jules is the most famous, all of whom have been very involved in the golf industry in the Québec City area.

Jack Bissegger (1932-2009) won his share of tournaments in the province, including the Québec Open in 1963 and four victories at the Spring Open, but it was as the very first professional from La Vallée du Richelieu in 1965 that he was recognized, a position he held for over 20 years.

Adrien Bigras (1938 - ) was certainly Québec's most prolific professional with more than 110 victories. Among his many accomplishments are his six wins at the Spring Open and his victory at the Québec Open in 1965. His participation in the 1962 U.S. Open in Oakmont, where he recorded the lowest qualifying score, outscoring more than 2,000 competitors, should not be overlooked. To this day, he remains the last Quebecer to hold a regular card on the PGA Tour, having competed in 20 tournaments on American soil in 1964-65.

A true globetrotter of golf, Daniel Talbot (1953 - ) enjoyed a long and prosperous career that led him to compete all over the world. From a young age, he was crowned twice at the Provincial Junior Championship, first in the juvenile category in 1968 and then in the junior category in 1971. He also won the Duke of Kent in 1972 as an amateur and the Spring Open twice in the professional category. On the PGA of Québec's Tour, he has more than 50 victories to his credit.

In the second part of this column, we will introduce you to our builders and the volunteers who have shaped the Québec Golf Federation throughout its history.