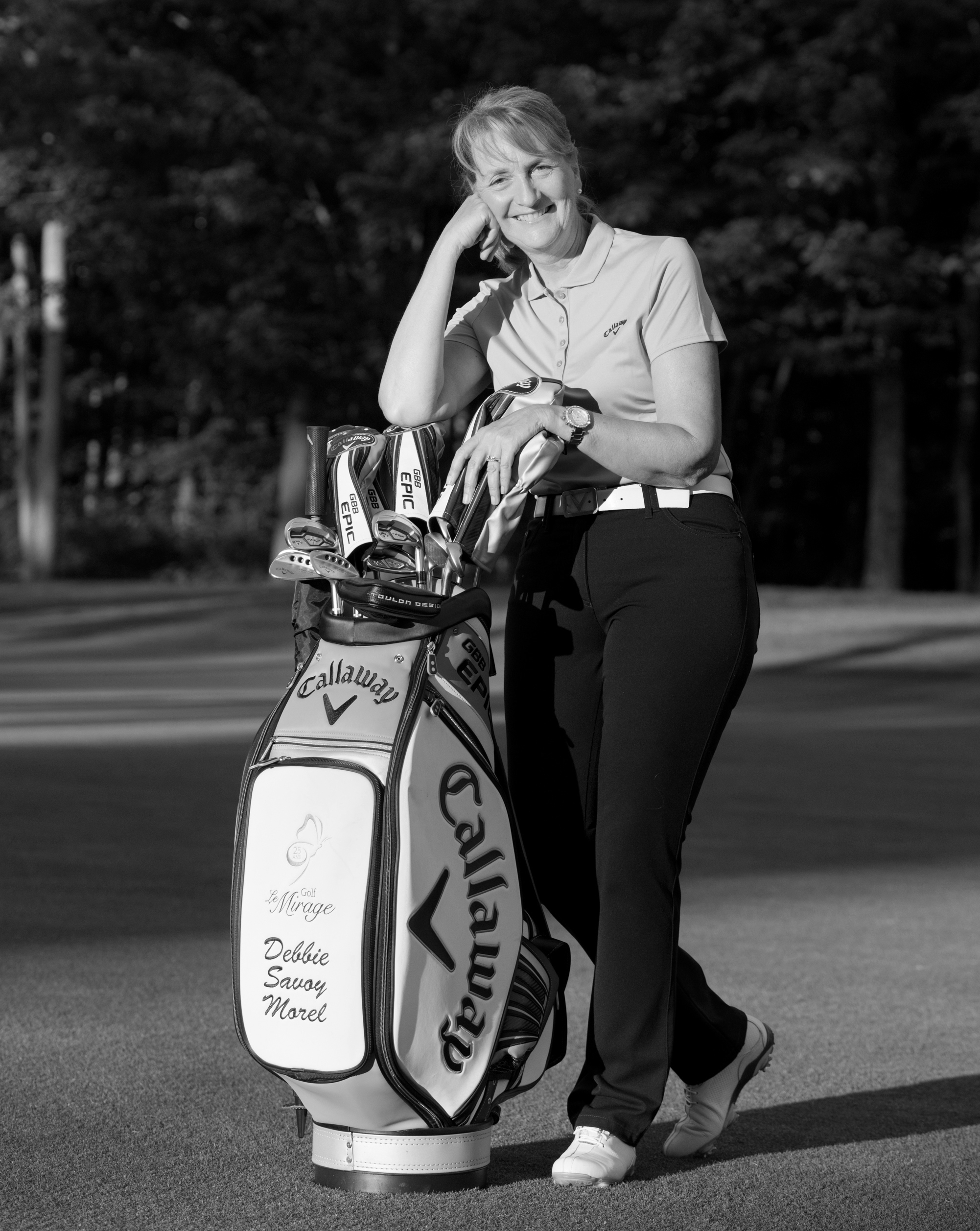 Debbie Savoy Morel (1953 -...) inducted in 2017
(Photo credit: Judith Gauthier)
Souvenir video clip (in French)
First woman acting as Head Professional of a 36-hole facility in Canada
A New Brunswick native raised in La Tuque, Debbie Savoy Morel is a renowned golfer and a powerful model of success for women in golf.
Debbie acquired a Bachelor of Business Administration with Great Distinction, in Human Resources and Marketing from Bishop’s University, before becoming a professional golfer some 24 years ago. Class A member of the PGA of Canada, she is a Level 2 certified coach trained in the National Coaching Certification Program (NCCP) program. She was also one of Golf Québec’s coaches for elite female golfers and one of the first coaches of the AGP of Québec Golf-études program, a position she held for five years.
Honoured 13 times in the Top-10 of best Canadian golfers, Debbie was a member of Team Canada for seven years and was a member of Team Québec 14 times. She took part in numerous championships presented all around the world, including the Canadian, British and Mexican championships, US North & South Championship, Liverpool International Championship, Commonwealth Games, and World Championship held in Cali, Colombia.
Debbie Savoy Morel was proclaimed Athlete of the Year in 1976 and 1978 in the Mauricie–Bois-Francs region. In 2002, AGP du Québec presented her with the “Gentleman of the year Trophy”, voted by her fellow Québec professionals and in 2008 Teacher of the Year. In 2005, the National Post appointed her to the Top 50 of Canadian Teaching Professionals and, in 2006 she was inducted in the RBC Wall of Distinction of Bishop’s University. In January of 2010, Debbie was also inducted into the Mauricie–Bois-Francs sports Hall of Fame. Based on this outstanding record, Golf Canada presented her, in 2012, with the Distinguished Service Award.
Her extensive knowledge of golf brought her to become a sports analyst on television, instructor in televised golf shows, and she writes golf specific instructional articles in well-known golf magazines such as Golf International. Moreover, in 2006, Debbie fulfilled one of her lifelong dreams when she released a golf teaching DVD called “A Swing for a Lifetime” in collaboration with Anne Chouinard.
Driven by her passion for golf, she attended numerous seminars presented by the greatest names in our industry, including David Leadbetter, Dr. Dede Owens, Donna White, Butch Harmon, Craig Shankland, Bob Vokey, Rodger Cleveland, Bob Rotella, Dave Pelz, and many others.
Nowadays, Debbie is a Class A Golf Director of the PGA of Canada at Golf Le Mirage. Even though she has numerous administrative responsibilities, she dedicates a lot of her time to lessons and clinics offered to all levels of golfers. She is a strong supporter of women in the game of golf and shares her passion for promoting the development of new participants. Debbie is also involved with the Jocelyne Bourassa Series which is comprised of two provincial women’s championships, including one that is named after her: the ‘Debbie Savoy Morel Cup’. This annual tournament is presented in rotation at Golf Le Mirage and the Ki-8-Eb golf club, in Trois-Rivières, where she has been living for 40 years.