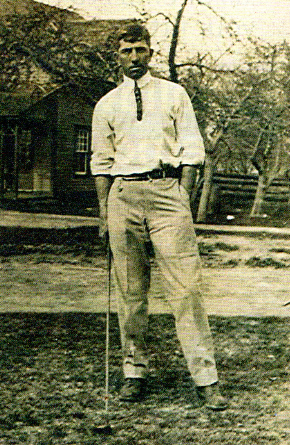 As a boy, Karl Kaspar Keffer spent most of his time on the Toronto Golf Course close to his home. He worked part time as a caddy and played baseball and hockey. He worked for a while in a candy factory but a boiler blew up and that ended his candy career. He played senior hockey until 1908 when he received a skate-blade foot wound which bothered him the rest of his life.

To this day, Karl Keffer is the only Canadian-born winner of the Canadian Open Golf Championship.

He was a founding member of the Canadian Professional Golfers' Association in 1911, its Secretary-Treasurer 1914-1928, Captain from 1934-1937 and President from 1938-1943. He would spend his summers at the Royal Ottawa Golf Club in Aylmer, Québec, and his winters as the pro at the Jekyll Island Golf Club in Jekyll Island, Georgia, USA. He also won the Manitoba Open in 1919 and the Québec Open in 1926.

Karl Keffer married Eveline Freeman in 1913 and their son Howard Franklin Keffer was born on November 25, 1914. From 1916 to 1919, Karl was a soldier in WWI (Sapper in the Royal Canadian Engineers). He was primarily a runner of messages between the trenches. He was influential in getting many young men to join the fight by writing letters in newspapers and to companies and associations, including the Canadian Golf Association. Sadly, while Karl was in France, Eveline was stricken by the influenza pandemic which was sweeping the world in 1918 killing millions of people.

Karl Keffer was also renowned for his club-making ability as well as his golf course design capabilities and his hickory-shafted golf clubs are treasured by collectors.

Karl Keffer continued to serve as a consultant with the Royal Ottawa Golf Club after his retirement in 1943. In the Royal Ottawa's Captain's Book for 1955, there is a hand-written record: "October 22nd, Karl Keffer passed away... a great golfer, sportsman and gentleman."