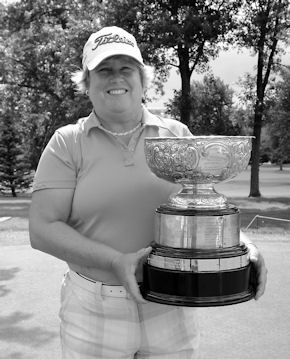 “Mary Ann’s record is really spectacular! She is not only an elite golfer and great champion, she also gets personally involved in the development of the golf industry by working as the Sport Development Coordinator of the Golf Association of Ontario” explained Diane E. Drury, President of the Québec Golf Hall of Fame Nominating Committee.
A lifetime member of the Whitlock Golf and Country Club, Mary Ann was a remarkable ambassador for Golf Québec. Among others, she won the Women’s Provincial Amateur Championship six times (1981-1982-1990-1993-1994-1999). Her golf performances led her to be on the Québec Junior Team once and on the Québec Women’s Amateur Team twelve times. More recently, she also won the Women’s Provincial Mid-Amateur Championship in 2005, 2008, and 2010.
Even if this is already a very nice scorecard, Mary Ann did not only represent Golf Québec. She also competed in Ontario where she won the Amateur Championship five times and the Eastern Provinces Championship six times. She also established a provincial record by winning the Mid-Amateur Championship twelve times and being a member of Ontario’s Interprovincial Team nine times. These performances brought her the honours of being inducted in the Ontario Golf Hall of Fame in 2005.
On the Canadian scene, Mary Ann was crowned at the Canadian Amateur Women’s Championship in 1993, 1996, 1999, and 2004. Moreover, she just captured the Senior title for a second consecutive year. She cumulated 15 top ten finishes in 24 national appearances. She was also invited to represent Golf Canada 12 times at the World Amateur Championship and Commonwealth Matches.
At the international level, Mary Ann won the United States Mid-Amateur Championship in 2005. As a result, she is the only Canadian with this title. In 2010, she was the US Senior Women's Amateur Semi-Finalist. With such an outstanding sport profile, it is not surprising that she was inducted in the Canadian Golf Hall of Fame in 2007.