It doesn't seem to be true! 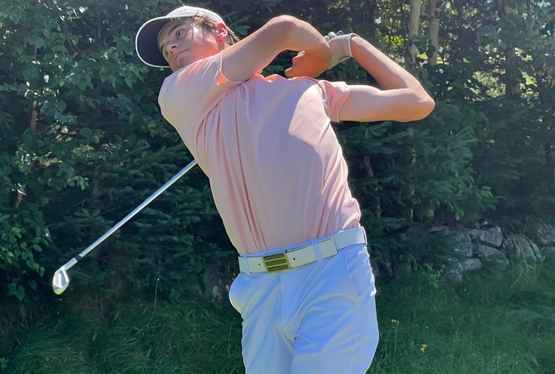 "It's incredible! I'm so proud, it's like it's not real! I'm very happy," he said after the fourth and final round.

Long coached by Jonathan Moreau, now a Club Professional at the Bic Golf Club, Jomphe hit the road last Saturday to enjoy a few extra days. He received some advice from his mentor to fine-tune his preparation.

The strategy seemed to pay off throughout the week. After shooting a one-over par 73 in Tuesday's opening round, Anthony Jomphe came out on top with the best scores of the next two rounds. He shot 69 (-3) and 68 (-4) and held a three-shot lead over his closest competitor, Samuel Breton Gagnon (Royal Québec).

Thursday's thunderstorms forced not one, but two suspensions of play in the Bas-Saint-Laurent region. The third round could not be completed until Friday morning, pushing back the fourth round by a few hours.

"It breaks the rhythm a lot, it's quite difficult! We need to stay focused and continue to play well, as we know how to do," said Jomphe, who played par (72) in the final round. He was able to maintain his lead and finish the competition at 282.

Mathieu Lafontaine (Summerlea) delivered his best performance to move up two spots in the final standings. He finished with a 288 cumulative score thanks to his final round of 70 (-2). Justin Grimard (Blainvillier, 289) rounded out the podium.

Guillaume Paquette (Blainvillier), the 2021 Juvenile Champion, tied for ninth place this year with a 294 overall. 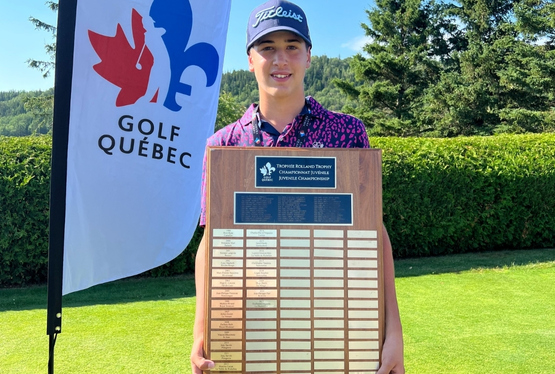 Winner of the 2021 Bantam, Pee-Wee, and Mosquito Championship, Émile Lebrun (Île de Montréal) made his junior debut by being crowned in the juvenile division.

As in his first round, Lebrun posted a 72 on Friday to bring his total to 290. Although he was hoping to get his hands on both titles this week, he is delighted with his performance.

"It's really fun! I may not have won the junior, but at least I managed to win the juvenile. I feel really good," he said.

Robitaille was in third place going into the fourth round, but he shot his best score (71), the only one under par, to pull ahead of Jasmin, who shot 74 (+2) on Friday.

Just like Anthony Jomphe, the two interruptions that took place on Thursday, during the third round, represented quite a challenge for the young golfer.

"I was a bit angry because I was playing great! I had just made four birdies in five holes, so I didn't really want it to stop. But hey, that's life, we were able to start again this morning and it was okay."

The two winners of the day had nothing but good things to say about the Bic Golf Club, which hosted the same event in 1984.

"I had a great week and played well. It's a beautiful course, even if we had difficult conditions. I'm very happy," said Jomphe.

"It's a beautiful place and the course is super nice. Many thanks to the Bic Golf Club for hosting us," concluded Lebrun.

The action resumes this weekend for Golf Québec with the Machinex Open at Club de golf Laurier. The Québec Games will follow next week, when golf is scheduled for July 27-30 at the Saint-François Golf Club.

Heading to the Canadian Championship

The Junior Boys Provincial Team will be made up of Team Canada members Félix Bouchard (Vallée du Richelieu), James Newton (Royal Ottawa), and Jean-Philippe Parr (Ki-8-Eb). They will compete in the inter-provincial competition presented by Golf Canada as part of the Canadian Junior Boys’ Championship at Rivershore Golf Links in Kamploops, British Columbia, August 7-10, 2022. They will try to defend the title won in 2019 by our Quebecers in the last edition of the team competition.