Anne-Léa Lavoie Sweeps Up the Titles 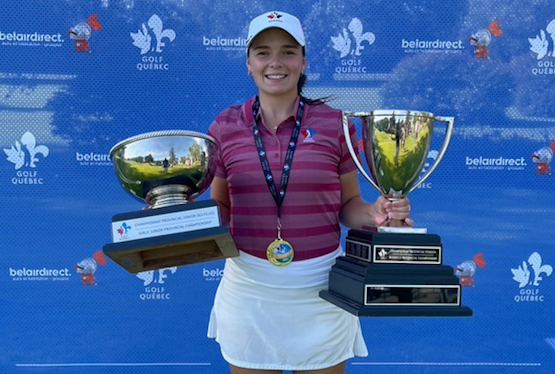 Saint-Jean-sur-Richelieu, July 13, 2022 – Anne-Léa Lavoie was the star of the 97th edition of the Women's and Junior Girls' Provincial Championship presented in collaboration with belairdirect that concluded Wednesday at the Club de Golf St-Jean. The member of Lorette Golf Club concluded her tournament in style, finishing with an overall score of +7 (220) for first place in the event's overall ranking.

The 17-year-old saved the best for last, to say the least. After posting rounds of 74 (+3) in her first two outings this week, she came back strong on the third and final day of activities, where she shot a +1 (72). This allowed her to climb to the top of the all-category leaderboard and add the event's amateur and junior titles to her tally.

"Throughout the week I knew my game was really close. My irons were solid and that made the difference today. In general, it went really well and it's definitely good for my spirits. My goal when I came here was to win and now, I've done it with one of my biggest victories on the Golf Québec tour," said the player who won the junior and juvenile divisions last year.

Lavoie was able to count on a major ally throughout the three rounds of play, namely her father, Stéphane, who was her caddy during the tournament. One thing is clear: his presence was one of the keys to his daughter's success, and she didn't hesitate to return the favour at the end of the event.

“It went really well and I can only thank him for everything he did," said the winner. “He encouraged me every time and cheered me up when I was down. It made a big difference to me and I'm very grateful.”

The third and final round was a constant showdown between Lavoie and the defending Amateur champion, Élizabeth Labbé (Lévis). The latter put up a good fight against her rival, but she finally had to accept that she was defeated, ending the tournament with a cumulative score of +10 (223).

Not far behind the pair, their fellow player and leader after two rounds, Ann-Sophie Bourgault (Le Maître) had some difficulties on Wednesday, which did not prevent her from standing out in the final ranking.

The author of the best round of the tournament, recorded on Tuesday at -2 (69), triumphed in the juvenile category (16 and under) with a cumulative score of +12 (225), in addition to taking second place in the junior category and third in the amateur category.

Although she would have liked to do better in the final round, the young golfer was proud of the work she accomplished and the experience she gained alongside older players.

"All week I was able to hit my tee shots in the fairway and sink some big putts. I didn't do so well today, but I learned a lot and it was really cool to play with juniors, amateurs and seniors," she commented with a smile on her face and her medals around her neck.

Naomi Yacyshen (Vallé du Richelieu, 232) and Isabella Ferguson (Ottawa Hunt, 232) rounded out the top-3 in the junior category, while Antonia Ho (Ottawa Hunt) and Léonie Tavares (Glendale) finished tied for second in the juvenile division at +20 (233).

An emotional victory for Marie-Thérèse Torti

There was no slackening in the senior division either, which was won by Marie-Thérèse Torti, with a cumulative score of +13 (226). The golfer from La Vallée du Richelieu Golf Club was at the helm from start to finish of the tournament to win her fourth senior provincial title after those of 2013, 2017, and 2018.

"It feels good," said the veteran, who is coming off her first win after a long and painful battle with cancer in the 2021 season. "The beginning of my season wasn't as good as I wanted, and I prepared very well for this tournament. I played the course twice before the event and it paid off. I'm very, very happy to put my name back on the trophy after everything that's happened!"

In the final standings, the new Golf Québec Hall of Fame inductee finished ahead of Suzanne Ricard (Royal Montreal), the 2021 Senior Champion, and Marlene Desbiens (Murray Bay), who finished at +20 (233) and +22 (235) respectively.

A total of 71 women golfers participated in the event this week. Four of them were awarded the Nancy Walker Sportsmanship Award, which is given out annually at Golf Québec's women's tournaments to highlight the importance of showing respect for fellow competitors, tournament officials and the sport of golf.

Heading to the Canadian Championships

The end of the Provincial Women's and Junior Girls' Championship brought to a close another successful edition of the Jocelyne Bourassa Series which, once again this year, served as a ranking to determine which women golfers will go on to represent the province in the various national competitions coming up this summer.

In the junior category, Anne-Léa Lavoie will be joined by Geneviève Jobin-Colgan (Lorette) and Mackenzie Cloutier (Le Blainvillier). The trio will represent Québec at the interprovincial competition presented by Golf Canada as part of the Canadian Junior Girls Championship at Marshes Golf Club in the Ottawa Valley.

Anne-Léa Lavoie will also complete the Québec amateur team alongside Céleste Dao (Summerlea) and Sarah-Eve Rhéaume (Royal Québec), both members of the national team, at the Canadian Women's Amateur Championship in Kitchener, Ontario.

Marie-Thérèse Torti, Suzanne Ricard and Marlène Desbiens will constitute the Québec trio at the Canadian Championships in Headingley, Manitoba. This will be Torti's 21st participation in a Canadian event.

The Golf Québec team now turns its attention to wrapping up the Men's Provincial Amateur Championship on Thursday, with the presentation of the fourth and final round at the Summerlea Golf and Country Club.