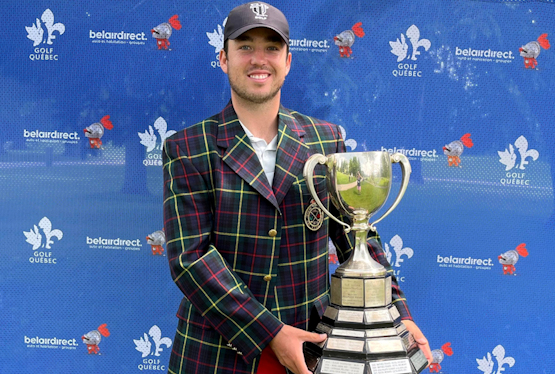 Alexandre Mercier, winner of the Duke of Kent

Québec City, July 5, 2022 - Alexandre Mercier will long remember the 88th edition of the Duke of Kent, which concluded this Tuesday on the lush fairways of the Royal Québec. The golfer from Le Blainvillier made the most of the prestigious tournament to record the first victory of his career in Québec, alongside a very special person who has never ceased to encourage him since he started in the sport.

"I still can't believe it! It's my first victory on the Golf Québec tour and at the Duke of Kent, so it's definitely a special feeling. I've been playing tournaments for over seven years, and I finally won one," said Mercier, grinning from ear to ear in his new plaid jacket.

The winner was unwavering in the second and final round of the tournament. Tied for second at -2 (70) at the beginning of the day, Mercier showed consistency and thoroughness to play par (72) on Tuesday and capture the top honours of the event.

Moreover, the Montrealer had to deal with the unfamiliar pressure of the crowds who had turned out in large numbers for the occasion. "As the day went on, there were more and more people on the course," he continued. “On the 18th hole, I knew I was in the lead, but I remained aggressive. It was hard not to let myself get distracted, but I did it very well. I stayed in my bubble, executed well and I'm very proud of myself.”

Mercier put the finishing touches on his tournament by sinking a short putt for par in front of the watchful eyes of his father, Sylvain, who was acting as his caddy for the event.

"I'm very happy that I was able to experience this with him! My mum was also following me from home all day. Living this moment with my dad on the bag felt so good. I've been knocking on the door for a few years, including a second-place finish at the Kent in 2020, so it's good for my spirits and for future tournaments. We'll remember this for the rest of our lives," he concluded.

The competition was fierce until the very end and Guillaume Paquette (Blainvillier) finally took second place with a cumulative score of -1 (143) at the end of the tournament. 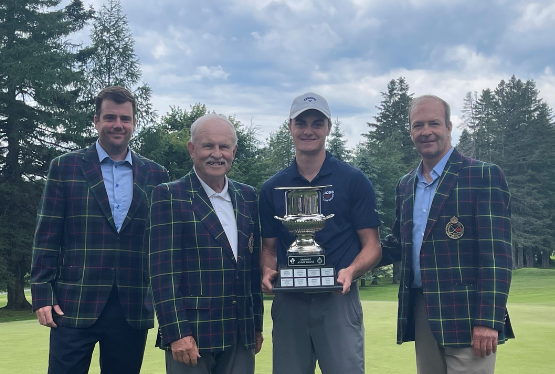 Not far behind, local golfer William Forgues completed the event in third place, tied with par (144). The result allowed him to win the André Gagné Trophy, which is awarded annually to the best player from the Québec City area, in honour of the man who has participated in 55 consecutive editions of the tournament, winning three times.

"This is a very good performance for me. It's always disappointing not to finish with a win, but I'm still very satisfied. I was a little nervous, but my game held up, so it's positive. It's probably my best performance at Golf Québec, and at home too. I can't wait for next week to continue this momentum," said Forgues after the day's play.

Brandon Rattray (Vallée du Richelieu) and Maxime Marengère (public golfer) also finished tied for third with a cumulative score of 144. The leader after the first round, young Émile Lebrun (Île de Montréal), slipped five positions in the rankings, finishing at +2 (146).

No less than 136 golfers participated in this year's Duke of Kent in what was once again the second leg of the Triple Crown, presented in collaboration with belairdirect. As tradition dictates, the third and final leg will be played at the Men's Provincial Amateur Championship scheduled at Summerlea, July 11-14.

Again, this year, the Triple Crown Order of Merit will determine which members of the Québec team will compete in the inter-provincial competition of the Canadian Men's Amateur Championship to be held August 1-4, 2022, at Point Grey Golf & Country Club in Vancouver. Note that players who are part of the current year's National Amateur Team will automatically be part of Team Québec.

The 88th edition of the Duke of Kent coincided with the 70th anniversary of the first French version of the Rules of Golf. This was the result of a collaboration between James England of the Canadian Golf Association and Ralph A. Benoit, Secretary of the Royal Québec at the time.

The Golf Québec team is now turning its attention to the organization of the Men's Provincial Amateur Championship, as well as the Women's and Junior Girls' Provincial Championship, which will take place from July 11 to 13 at the Saint-Jean Golf Club.