Joey Savoie Crowned in a Playoff at Beaconsfield 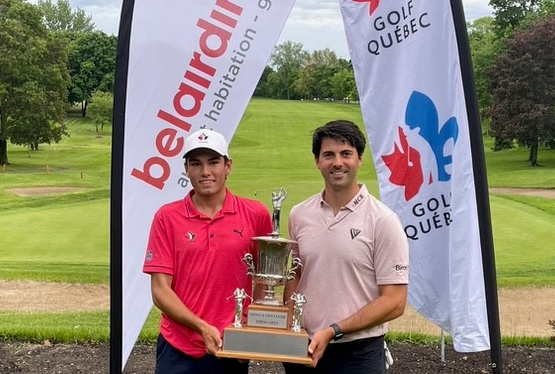 Spring Open Get the complete results

Pointe-Claire, May 27, 2022 – The ups and downs of Mother Nature didn't slow down Joey Savoie and Brandon Lacasse this Friday at the Beaconsfield Golf Club, where the traditional Spring Open presented in collaboration with belairdirect was taking place. The two professionals battled it out throughout the tournament, which finally ended in Savoie's favour on the first playoff hole.

After shooting 64 (-7) in a rain-soaked round, both golfers returned to the 18th tee to determine the winner.

Joey Savoie hit the 484-yard par 5 to the green in two shots. The member of Team Canada’s Young Pro squad and of the Pinegrove Country Club then just missed the eagle, before closing with a birdie to put pressure on his opponent.

Lacasse then had to make a 15-foot putt but could not force a second playoff hole. The Knowlton professional came up short, conceding the win to his opponent.

"In a situation like this, there's very little strategy. I just tried to get back into the same mindset as in my round. I was quite aggressive today and managed to stay hot before the playoff started. I was ready mentally and physically and made two good shots to start the hole. In the end, I just missed the putt for an eagle, but the birdie was good enough," analyzed the winner of the 94th edition of the Spring Open.

This was his second title as champion of the Spring Open after the one he won in 2015, and a third victory for the man who also won the amateur division of the tournament in 2013. As on the first two occasions, Savoie was able to count on the support of his father, Pierre, who managed his equipment and provided valuable advice on the course.

"On such a rainy day, it's very difficult to keep your clubs dry. It's a big challenge and I had the advantage of having my father with me. That was a big bonus for me, and I could concentrate on my stroke. I had less to deal with and that's largely thanks to my caddy," he concluded.

A playoff was also necessary to determine a new amateur winner. James Newton (Royal Ottawa) and Laurent Desmarchais (Vallée du Richelieu) both shot a round of 68 (-3) and had to face each other to see who would claim the title on the 18th hole.

Eventually, the Ontarian emerged victorious with a birdie after a brilliant drive from the bunker on the edge of the green. He saw his rival come within inches of the cup on his fourth shot, after which he was able to secure his victory with a short putt.

"I just wanted to play as well as in my round and tried to hit the green in two. I didn't necessarily hit a good second shot, but I was able to get over it and putt my way to victory. We'll take it," Newton said after the tournament.

It was no easy task for the Team Canada Junior squad member who dropped four shots from the par on the back nine to join Desmarchais, a member of the National Amateur Squad, at the top of the leaderboard.

“I was hitting well at the beginning of the round, but I wasn't as accurate," he said. “However, the further I got, the better I felt and I was able to get much closer to the goal on my approach shots. I was able to keep that momentum going into the playoff to win."

A total of 119 participants took part in the event this Friday. Among them was female golf professional Caroline Ciot (Golf Île de Montréal) who tied for 77th with an overall score of +6 (77). The tournament was also marked by an albatross on the 12th hole recorded by Denis Girard (Casselview). Girard's second shot of the par-5 hole was a 5-iron from 188 yards.

The Golf Québec team is now turning its attention to the organization of Marie-Thérèse Torti's Hall of Fame induction ceremony, which will take place on May 31 at La Vallée du Richelieu. This will also be the start of the Men's Match Play Championship, scheduled for four days of competition at Le Drummond in St-Majorique.