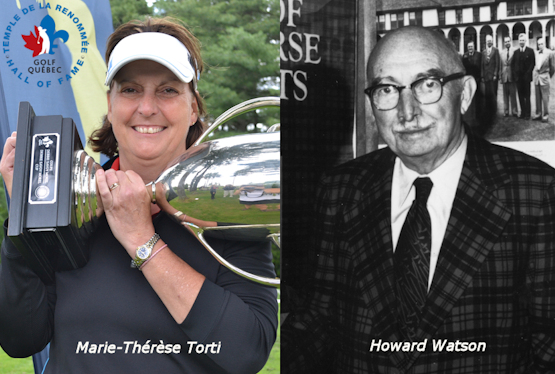 A Lachine native, Marie-Thérèse Torti has a McGill University MBA and is now a self-employed computer consultant. Inspired by her father, her passion for golf began as a family activity in her teens. She was a member of Club de golf L'Épiphanie from 1979 to 1982 before joining Club de golf de la Vallée du Richelieu in 1983. Since then, she has set the women's record on the Rouville course with a round of 65, the facility's record as a 21-time female Club Champion (1997, 1999, 2001 to 2018, 2020), and had the opportunity to be part of the interclub team 36 times.

An accomplished amateur golfer, her record sheet is second to none with an impressive 25 provincial event wins. What is even more remarkable is that, at one point or another in her far from finished golf career, she has etched her name on every trophy that still exists to date. First of all, in the Jocelyne Bourassa Series: both the amateur (1) and senior (3) divisions of the Women’s Provincial Championship, the Debbie Savoy Morel Senior Cup (4), and both the amateur (1) and senior (2) categories of the Players’ Cup. In addition, she won the Mid-Amateur Championship (4), both the amateur (3) and senior (2) divisions of the Match Play Championship as well as the Suzanne-Beauregard Commemorative Tournament (6).

A proud mother of two fine young gentlemen, Marie-Thérèse Torti has always made it a point to balance her family, professional, and competitive life while finding time to add volunteer work to her resume. Her candidacy is undoubtedly enriched by all the work she has accomplished within her club as Chair of the Junior Committee, from 2010 to 2014, where she contributed to the establishment of a junior development program that sees a hundred young people aged 5 to 9 discover golf each year and those of 10 to 18 years old develop their golfing skills.

At Golf Québec, we have seen her contribute to the advancement of many initiatives as a member of the Commission of Excellence from 2002 to 2004 and Director of the first Fédération québécoise de golf from 2004 to 2007. She was also Vice-President of the Canadian Ladies Golf Association - Québec Branch, in 2004, before joining the Board of Directors of Golf Québec after the merger of the men's and women's provincial amateur associations. She was Chair of the Development Committee from 2005 to 2007.

Her accomplishments at Golf Canada cannot be overlooked. As a Governor of the Royal Canadian Golf Association (RCGA) from 2006 to 2009, she served as Chair of the Women's Championship Committee before moving on to chair the Player and Program Development Committee from 2009 to 2011. In this position, she contributed to the activities of the Amateur Championship Committee, Women's Fund Committee, and national Nominating Committee.

Born in Dresden, Ontario, in 1907, Howard Watson was a renowned golf course architect who designed over 150 courses in Ontario, the United States, Colombia, and Jamaica. However, his greatest contribution was the 67 courses in Québec including Carling Lake, Pinegrove, Joliette, Islesmere, Royal Québec, Hillsdale-Laurentian, Cedarbrook, and Cap-Rouge, to name a few. In 1974, he also oversaw the modifications to the Candiac Golf Club to prepare for the DuMaurier Classic.

After receiving a degree in agriculture from the University of Toronto with a specialty in soil biology, in 1929, he spent the next two years learning, as the principal associate, from Stanley Thompson. His first solo design came in 1933 when he built 9 holes in Seaforth, Ontario. In the 1930s and 40s, he worked closely with Robert Trent Jones, who had also joined Thompson's team and with whom he shared a distinctive course design strategy recognizable for characteristic large greens and bunkers.

During the Depression and Second World War, he was a superintendent, turf consultant and engineer, as a Major, in the Canadian Army. After the war, he and his wife Betty moved to Québec, more specifically to Lachute. There, in collaboration with Thompson and at the request of young industrialist Gilbert Ayers, he designed a golf course just outside the city. It was at that location, which would one day feature two courses, that Howard Watson conducted his experiments to develop a subterranean irrigation system on two greens to provide for watering without interrupting play and had his design office in a distinctive home on the 18th green of the Member’s course.

President of the American Society of Golf Course Architects in 1958-59, he was a member of the Canadian Golf Superintendents' Association for 38 years and counted other renowned architects such as Graham Cooke and John Watson among his apprentices. Quiet and very private, he was known for his work as a superintendent and for his research on turf maintenance. He passed away in 1992 and was nominated this year for induction into the Québec Golf Hall of Fame as an industry builder.

The Québec Golf Association’s Hall of Fame was conceived by three past presidents of the QGA, Larry Boyle, Maurice Dagenais and Roger Legault. Their desire was to pay homage to the many great Québec players and builders who have distinguished themselves provincially, nationally or internationally. A general consultation process began as various groups were asked to identify different personalities who might be honoured. Next, a selection committee was established with a mandate to evaluate the proposed candidates and determine those that would be elected for the inaugural ceremony in 1996.

The 2021 Hall of Fame Committee is comprised of four (4) Past Presidents of Golf Québec, Diane Dunlop-Hébert, André Burgoyne, Marc Tremblay, and Jacques Nols –himself inducted in 2012–, one (1) inductee, Debbie Savoy Morel (2017), one (1) representative of the Québec zone of the PGA of Canada, Dave Ross, and one (1) member, Paul Schofield.