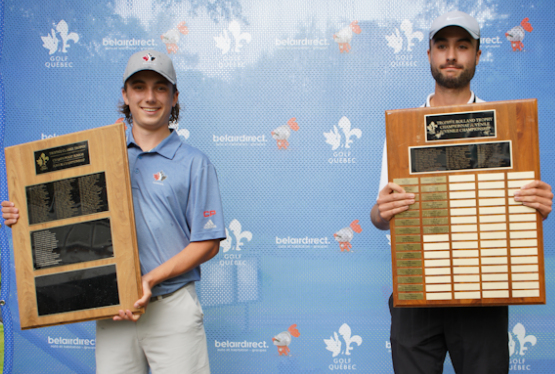 Val d’Or, July 15, 2021 – Félix Bouchard (Vallée du Richelieu) experienced a dream week at the Club Sports Belvédère in Val d'Or where the traditional Boys' Provincial Junior Championship was held. With a cumulative score of -4 (284) at the end of the fourth and final round played on Thursday, the Otterburn Park golfer claimed the title as Provincial Junior Champion.

Tied for first at -2 with Guillaume Paquette (Blainvillier) heading into the final round, Bouchard registered another strong performance on Thursday, shooting a two-under par 70. This moved him into sole possession of the overall lead and enabled him to capture the coveted title.

As for Paquette, he ended the day with a score of 74 (+2) to tie for second place overall. However, the young man did not leave Abitibi-Témiscamingue empty-handed as his cumulative score of +1 (289) was the best of the juvenile division.

Double champion last year in Bromont, Jean-Philippe Parr (Ki-8-eb) was not in the field this year.

This action-packed week was marked by several exceptional shots, including that of Vincent Paquin (Continental), who made a hole-in-one on the ninth hole on Monday.

A total of 122 participants between the ages of 13 and 18 and coming from the nine junior regions under the Golf Québec umbrella took part in this tournament presented at the Club Sports Belvédère for the third time, after the previous editions in 2004 and 2012.

The event's organizing committee had two Honorary Co-Chairs this year, Johanne Fournier and Michel Leduc. Golf Québec would like to thank the host club, as well as all the organizers and volunteers who made the tournament possible.

On the way to the Canadian Championship

As tradition goes, this event allowed several young athletes from the province to secure their place at the Canadian Junior Men's Championship, which will be held at the Richelieu Valley Golf Club from August 9 to August 12, 2021.

The 22 top-ranked golfers from the four rounds presented in Val-d'Or secured their participation in this national event, which will bring together the best talent in the country. A playoff was necessary after the fourth round of the provincial tournament to determine the last player to earn a spot at the national event. In the end, Théo Desroches (Blainvillier) won in a three-way battle.

Félix Bouchard, Malik Dao, and Jean-Philippe Parr were guaranteed to take part in the Canadian Junior Men's Championship as they are members of the Team Canada junior squad.

The Golf Québec team will now head to the Summerlea Golf Club and Country Club for the Men's Provincial Amateur Championship presented in collaboration with belairdirect. This event will take place from July 19 to 22.