Benson and Ciot crowned at the Bromont Invitational 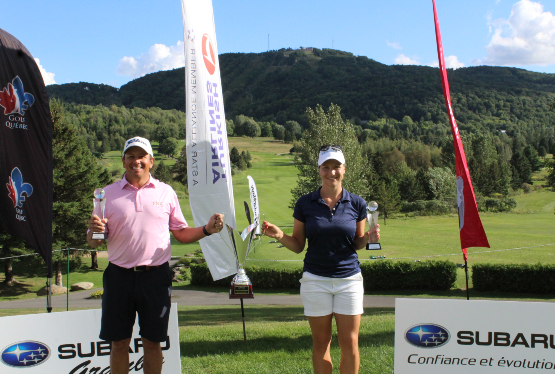 Get the complete results - Bromont Invitational
Photo album on Facebook

Montréal, August 19, 2020 – The Bromont Invitational was presented this week at Domaine Château-Bromont in collaboration with Turkish Airlines and belairdirect. From August 17 to 19, the best amateurs and professionals golfers measured up to each other in the men’s and women’s division.

In the first round, professionals Yohann Benson (Club Laval-sur-le-Lac) and Sonny Michaud (La Tempête) set the bar very high in the men’s competition by tying for 1st place at 65 (-7). On Tuesday, defending champion of the event, Benson kept up the pace and further widened the gap between him and the rest of the field, playing 68 for a cumulative -11. A cut was made after this second round to keep only the top 54 of the 90 participants.

Michaud attempted a comeback on the last day of the tournament, but still had to settle for second place as Benson played a final round of -1 (71) to finish the event at -12 (204).

"It was very close with Sonny (Michaud) and he was very solid during the tournament. I knew I had a bit of a head start before teeing off for the last round, but I was focused on my game. I didn't achieve all of my personal goals after three rounds, but it's fun and a great feeling to win again this year. I love playing here!" said Benson, who walked away with the $6,000 prize money.

Meanwhile, Michaud handed a final card of 70 (-2) and finished second, three shots behind Benson (207). Marc-Olivier Plasse (Pinegrove) completed the top-3 with a total of 208 shots (‑8).

In the men’s amateur division, Logan Boucher (Summerlea) and Jean-Philippe Parr (Ki-8-Eb) tied for first place with a total of -4 (212).

A first victory for Ciot in Bromont

In the women's event, the competition was fiercer and the picture changed a lot from one round to the next. On Monday, juvenile golfer Lydia St-Pierre (Royal Québec) took the lead at 72 (-1) with only one stroke ahead of professional Caroline Ciot (Country Club of Montréal). In the second round, professional Sabrina Sapone (Blainvillier) moved up in the ranking to take the lead at 148 (+2). A cut was then made to keep only 18 of the 30 competitors.

Sitting in second place going into the final round, Ciot finished her workday at -2 (69), which was enough to claim the title as well as a $5,000 purse.

"My second round was fairly ordinary, but I kept my head up for the final day," said Ciot. Today (Wednesday) the scores were very close and I was able to record a good round. I limited the mistakes as much as I could and it paid off. I've been aiming for this victory for three years and it seems that this year was my year!" said the winner of the event three shots above par (222).

Noémie Paré (Victoriaville) who had won in all categories of the 2019 edition of the Bromont Invitational was crowned as amateur champion this year. She completed the tournament at +9 (228).

Finally, let's note that Tuesday was highlighted with two holes-in-one made by Sylvie Schetagne (Golf-Tonus) and Raphaël Lapierre-Messier (Pinegrove).

The Golf Québec team would like to thank Martin Ducharme and his team at Domaine Château-Bromont who made this event possible by preparing the most exceptional course to challenge our competitors.

Next week, Golf Québec invites you to stay at Domaine Château-Bromont where the Provincial Junior Boys Championship will be presented on August 22-23 in collaboration with Turkish Airlines. The 2019 juvenile champion, Hugo Denis (Le Mirage) will be aiming for the junior title left vacant by William Duquette (Laval-sur-le-Lac) who made the leap to the amateur category.