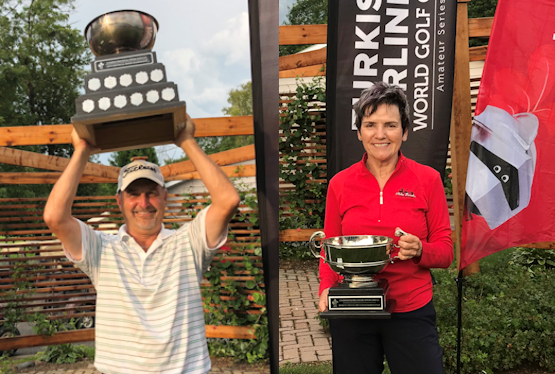 Montréal, August 11, 2020 – The Women's and Men's Provincial Senior Championship was presented this week in collaboration with Turkish Airlines and belairdirect at the Grand Portneuf Golf Club. For the first time in the history of these two events, the men and women divisions competed at the same time on the same course.

At the conclusion of the first day, François Bissonnette (Blainvillier) had taken the lead in the men's division with a first round score of 69 (-3), only two strokes ahead of his closest rival, Michel Gariépy (Boisés de Joly). Meanwhile, Teri De Luis (Brockville) was leading the women's competition with 76 (+4), also two strokes ahead of Marie-Thérèse Torti (Vallée du Richelieu) who has already won this event three times (2013, 2017, 2018).

The competition intensified as participants had to measure up against tough opponents, but also battle the overwhelming humidity of the heat wave that settled in the Pont-Rouge area this Tuesday. A thunderstorm and heavy rains required to suspend play twice and convert the competition into a 27-hole event. This decision was a complete game changer which enabled the two Monday leaders to win in their respective categories.

The Golf Québec team would like to thank Raymond Carpentier, General Manager of Le Grand Portneuf, the superintendent, Jean-Philippe Doucet, as well as the establishment's Board of Directors and its members, for making this event possible by opening their course to our competitors.

Next week, Golf Québec will bring together men and women, amateurs and professionals, at Domaine Château-Bromont for the Bromont Invitational presented from August 17 to 19 in collaboration with Turkish Airlines and belairdirect. Noémie Paré of Victoriaville will be returning. One would remember her victory from last year, when she faced professional Rebecca Lee Bentham in a sudden-death playoff. On the men's side, professional Yohann Benson of Club Laval-sur-le-Lac will also try to defend his 2019 title.