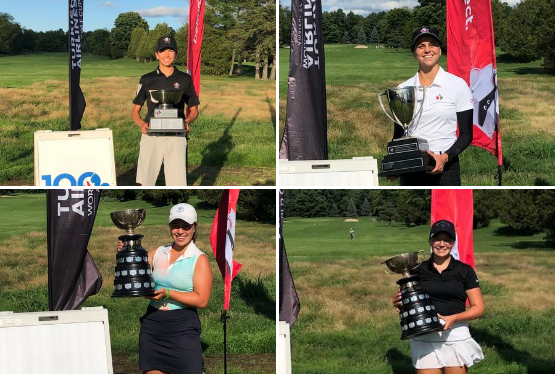 Montréal, August 3, 2020 – Once again, Mother Nature intruded on the course of events during the Men's Provincial Amateur Championship and the Women's and Girls' Provincial Championship, both presented in collaboration with Turkish Airlines and belairdirect, on the fairways of Club de Golf Lachute from August 1 to 3. Due to heavy rainfalls, play in the second round had to be suspended in the afternoon. The course having become unplayable in some areas, the tournament organizers had to cancel the Sunday round completely, thereby transforming the two events into 36-hole competitions.

No less than 15 golfers entered the final round of the Men's Provincial Amateur Championship with a score of under par. Among them was Malik Dao, who had a superb second round, bringing home a 67 (-5) to capture the victory.

"I started the day strongly and that helped me set the pace for the rest of my round. I prepared for most of the day yesterday (Sunday) and I knew I was in a good position to win the tournament. I knew what to expect and I'm very happy to have won the title," said the member of the Team Canada Junior Squad.

A hard-fought tournament in the women's division

In a scenario similar to last year's, Noémie Paré battled hard against Élizabeth Labbé (Lorette) to the very end of the day. This year, it was Paré's turn to win. With a second card of 73, ending the tournament at par (146), she captured her first provincial amateur title.

"It was a very fierce competition! I've been wanting to win the Amateur Championship for several years now, so I'm very happy. I think that I handled the speed of the greens well and it turned to my advantage at the very end," she explained.

As for Labbé (147), she finished second, tied with Emily Romancew and Lory Paradis (Le Mirage). The latter had to face each other in a playoff to identify the junior winner. After three more holes, Romancew finally had the upper hand over her good friend.

"I finished my round with a birdie, so that was a good start to my sudden-death playoff. Lory and I were pretty nervous, but we kept a good attitude. I'm really happy to end my junior career like that!" said the winner of last week's Junior Match Play Championship.

Finally, Anne-Léa Lavoie enjoyed the victory in the juvenile category. The 15-year-old golfer finished the Championship with a cumulative +3 (149), six shots ahead of her closest rival, Lydia St-Pierre (Royal Québec).

The Golf Québec team would like to thank Benjamin Painchaud, General Manager of Club de Golf Lachute, as well as the establishment's Board of Directors and its members, for making these two events possible by opening their two superb courses to all our competitors.

Next week, Golf Québec will present two tournaments on August 10 and 11.

First of all, our youngest competitors will be in the spotlight at the Provincial Bantam, Pee-Wee and Mosquito Championship that will be presented in collaboration with Turkish Airlines at the Drummondville golf club. Both members of Le Maître de Mont-Tremblant, Ann-Sophie Bourgault (2019 pee-wee champion) and Jimmy Galbraith (2019 mosquito champion) will be in attendance as well as the other 2019 champions, Claire Hu from Whitlock (mosquito), Émile Lebrun from Île de Montréal (pee-wee) and Thomas Lessard from la Vallée du Richelieu (bantam). As Lydia St-Pierre of Royal Québec is now longer a bantam player, a new rising star will be crowned in this category.

At the same time, golf fans will be able to follow the Women's and Men's Provincial Senior Championship presented in collaboration with Turkish Airlines and belairdirect at the Grand Portneuf Golf Club in Pont-Rouge, in the Québec City area. For the first time in the history of these two events, the men and women divisions will be competing on the same course. Jocelyne Smith of Milby as well as Jean-Guy Garnier (senior) and Michel Roy (super senior), both of Royal Québec, will be defending their 2019 titles.