Coming up in August 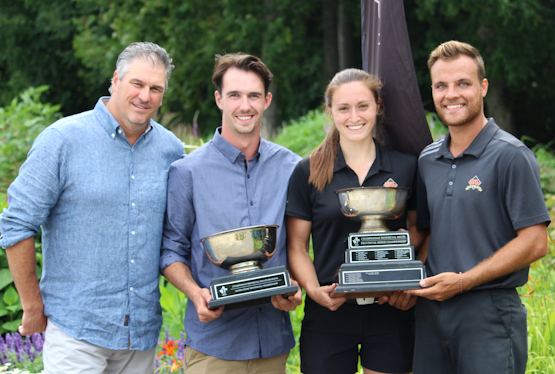 Coming up in August: golf tournaments for all tastes!

Montréal, August 1, 2019 – Now that most provincial senior, amateur, and junior champions have been crowned, in July, Golf Québec is looking forward to August. Once again, Québec golfers will be quite busy with the presentation of many events all over the province!

Shawn Farrell (Summerlea) will attempt to defend his 2018 title. However, the competition will be fierce. Other top contenders include François Bissonnette (Blainvillier), 2017 champion and 2018 runner-up, as well as Graham Cooke (Summerlea), five-time winner of the event and the last golfer to win the Championship two years in a row, in 2012 and 2013.

The top three (3) competitors of the Men’s Provincial Senior Championship will be representing Golf Québec in the Canadian Men’s Senior / Super Senior Golf Championship at The Cedar Brae Golf Club, Scarborough, Ontario from September 9 to 13, 2019.

Ladies will have the opportunity to participate in the second Women’s Clinic on August 22, at Golf Le Mirage.

After covering the short game, on May 22, Debbie Savoy-Morel and her LPGA guests, Donna White, Mary Lee Cobick, and Denise Lavigne, will offer precious advice on balance and strength, supported by specific exercises.

Golfers of all skill levels are invited to register now! Hurry up; there are only a few places left.

In the Junior Provincial Tour presented by Daigneau, eau de source naturelle in collaboration with Turkish Airlines, we will soon find out who will compose the team for the 2019 Canadian Junior Boys’ Championship.

This Thursday, at the Rockland Golf Club, in Ontario, the best junior competitors of the province will complete the Provincial Junior Boys’ Championship after which the three best players on the Order of Merit will be appointed to represent the province in the national tournament. This event will take place from August 12 to 15 at the Covered Bridge Golf & Country Club, in Hartland, New Brunswick.

The younger Québec hopefuls, boys and girls, will begin a very busy month of competitions at the Drummondville Golf Club where the Provincial Bantam, Pee-Wee and Mosquito Championship will take place on August 5 and 6.

Then, many of them will visit the Knowlton Golf Club to participate in the 24th edition of the Junior Provincial Match Play from August 19 to 21. With the addition of the Édouard-Grondin Trophy, last year, participants are now guaranteed to play at least to matches in this event.

Finally, our provincial junior golfers will attempt to capture the victory at the Graham Cooke Junior Invitational to be held at Domaine Château-Bromont on August 24 and 25.

Canadian championships are in the limelight

The Canadian championships are at their peak throughout the country!

Following the presentation of the 106th Canadian Women’s Amateur Championship, last week, Golf Canada is about to crown the best junior girls at the Lethbridge Country Club, in Alberta, where the Canadian Junior Girls’ Championship is held.

Many Québec golfers are participating in this event that will end on August 2. They include our Québec Team members, Céleste Dao (Summerlea), Emily Romancew (Elm Ridge), and Élizabeth Labbé (Lorette).

Étienne Papineau (Pinegrove), Étienne Brault (Pinegrove), and Olivier Ménard (Whitlock) will represent the province at the Canadian Men’s Amateur Championship to be held in Nova Scotia, from August 5 to 8, at the Glen Arbour Golf Club, in Hammonds Plains. Many other Québec players will compete individually, including Julien Sale (Rivermead).

Then, Marie-Thérèse Torti (Vallée du Richelieu), Jocelyn Smith (Milby), and Marlene Desbiens (Murray Bay) will take the stage at the Canadian Women’s Mid-Amateur and Senior Championship to be held at the Osoyoos Golf Club, in British Columbia, from August 18 to 20.

The last Canadian Championship of August will take place at The Summit, in Richmond Hill, Ontario, from August 20 to 23. Noah Norton (Caughnawaga), Ryan Sévigny (Eagle Creek), and Patrick Godin (Summerlea) will proudly represent Québec in the inter-provincial competition of the Canadian Men’s Mid-Amateur Championship.

A friendly get-together at Le Blainvillier

Due to the ever-growing demand of its member golfers who appreciate friendly tournaments instead of the stress that is associated with high-level competitions, Golf Québec organizes, every year the Provincial Generations’ Championship and Provincial Mixed Championship, two recreational tournaments that will be held on August 19 at Le Blainvillier.