New faces are crowned at Montcalm 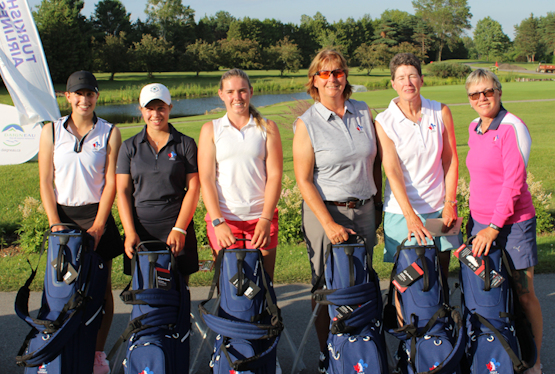 Junior, amateur, and senior members of the Québec teams

Montréal, July 16, 2019 – This Tuesday, at the Montcalm Golf Club in St-Liguori, new faces were crowned in the Women’s Provincial Amateur Championship and 50th edition of the Senior Championship presented by Turkish Airlines in collaboration with belairdirect. Besides witnessing the victories of Sarah-Eve Rheaume (Royal Québec, amateur) and Jocelyn Smith (Milby, senior), spectators also celebrated the triumph of a local favourite, Marie-Ève Pilon (Montcalm, junior).

With two strokes behind Noémie Paré (Victoriaville) after the first round, Rheaume registered an excellent round of 71 (-1) on Monday. From there, she never looked back or glanced at the ranking until she captured her very first provincial amateur title.

“This is such an amazing feeling and I am very proud of my tournament! I worked really hard for this title, especially in the end when I started struggling a bit. The key to my success was to remain focused on my game. It really paid off,” explained the young lady who registered an overall score of +5 (221), a three-stroke lead on Paré who ranked second.

Jocelyn Smith and Marie-Thérèse (Vallée du Richelieu) put on quite a battle in the senior division. After sharing the lead of the first round, both golfers went neck and neck on Tuesday until the tide turned in favour of Smith. As a result, she finally cherished her very first senior provincial title.

“Winning this tournament feels so good! The competition was fierce and I am quite proud of this victory. Marie-Thérèse (Torti) and I had been tied for first up to the seventh hole. Then, the rhythm changed, I was able to take the lead and maintain it until the end of the round,” revealed Smith who had won her last provincial title in 1983, as an amateur.

Overall, the Sherbrooke player praised her rival and good friend, Marie-Thérèse Torti, who was attempting to win this tournament for the third consecutive time.

“She (Marie-Thérèse) has won the last two editions of this event and she is such a driven competitor! Yet, we are close friends and we are always celebrating each other’s victories. This was a very nice tournament and this one will be a very special memory.”

At the end of the day, Smith registered a cumulative score of +8 (152). Hélène Chartrand (Summerlea, 155) managed to claim the second place while Torti (156) ranked third.

For the first time in the history of this event, the 25th edition of the Provincial Junior Girls’ Championship presented by Daigneau, Eau de source in collaboration with Turkish Airlines was combined with the women’s amateur and senior competition. Only representative of the host club in her category, Marie-Ève Pilon pleased the numerous supporters who came to cheer for her by winning the junior title, a moment that she will cherish for the rest of her life.

“I am speechless! This is my very first provincial victory and, to put a cherry on the cake, I am at my home club in front of my family and friends. They supported me throughout the competition and I am so grateful. It really feels good to see all those people who came out to see me play,” she confided at the end of the event.

However, capturing the victory was not an easy task for the local golfer as she was trailing behind Élizabeth Labbé (Lorette), the leader after two rounds, by only one stroke.

“I was second and, you never know, everything could have gone wrong! I actually bounced back today (Tuesday) by keeping my cool and staying focused. I made some very good shots and I am proud of the way I played,” concluded Pilon who finished the competition at +8 (224), two strokes ahead of Labbé (226).

Traditionally, the provincial teams composed of the three best golfers of each category in the Jocelyne Bourassa Series were presented after completion of this competition.

First, in the senior division, Marie-Thérèse Torti, Jocelyn Smith, and Marlene Desbiens (Murray Bay) will represent Golf Québec in the Canadian Women’s Mid-Amateur and Senior Championship to be held at the Osoyoos Golf Club, in British Columbia, from August 18 to 20, 2019.

Just like Thibault, the young Celeste Dao (Summerlea) also had a guaranteed place on the provincial team for the Canadian Junior Girls’ Championship that will take place in Lethbridge, Alberta, from July 30 to August 2, 2019. Élizabeth Labbé and Emily Romancew (Elm Ridge) will complete the Québec junior delegation.

Created in 2010, the Jocelyne Bourassa Series is composed of the Women’s Provincial Championship and Debbie Savoy Morel Cup that are used, with a points system, to identify amateur and senior teams representing the province of Québec in national championships. Honouring two notorious builders of our industry, Jocelyne Bourassa and Debbie Savoy Morel, the Series also features a participation flight to promote the fun of playing golf towards women. This year, the Series was celebrating its 10th anniversary.

The recipients of the Nancy Walker Sportsmanship Award were also presented during the closing ceremonies of the provincial championships. This prize is presented to strive upon the importance of respecting fellow competitors, tournament officials, and the game of golf.

Following a secret vote by all participants, Jany Martin (Rivermead, amateur), Jocelyn Smith (sénior), and Élizabeth Labbé (junior) were presented with this recognition.

Following the Duke of Kent that was held at the Royal Québec Golf Club as well as the Women’s Provincial Amateur, Senior, and Junior Championships, the Golf Québec team is getting prepared for the 102nd edition of Men’s Provincial Amateur Championship to be held at the Beauceville Golf Club from July 22 to 25, 2019. At the conclusion of this four-day event, we will find out the identity of the two (2) best players on the Triple Crown Order of Merit who will join Joey Savoie (Pinegrove) to form the Québec amateur team. As a member of the Team Canada Amateur Squad, Savoie already has a place with the provincial team that will represent Golf Québec at the Canadian Men’s Amateur Championship to be held in Glen Arbour Golf Course, Hammond Plains, and at the Links at Brunello, Timberlea, Nova Scotia, from August 5 to 8, 2019.