David Tweddell wins the U25 Championship in a playoff
Get the complete results: Men | Women

Montréal, June 20, 2019 – This Thursday, the competition was quite fierce between David Tweddell of Lac St-Joseph and Ty Celone of Upper Canada in the final round of the U25 Championship presented by Turkish Airlines in collaboration with belairdirect. At the end of the day, Tweddell was victorious in a sudden-death playoff and established a new tournament record.

The Québec City golfer was very successful this week at Club de golf Val des Lacs, in Ste-Sophie, where he started strongly with scores of -4 (67) in the first two rounds. Then, he played -1 (70) in the next two rounds to cumulate a score of -10 (274).

His main opponent, Ty Celone, was the epitome of consistency throughout the four rounds. Representing the Upper Canada Golf Club, located in Morrissburg, Ontario, he began the U25 Championship with a round of -1 (70) followed by three identical scorecards of 68 (-3) that led him to tie for first. The two players faced each other in a sudden-death playoff where Tweddell won by playing the par on the second hole. By doing so, he also captured his very first victory.

“Everything went pretty well for him, and for Celone too! Their cumulative score of 274 is a record for the U25 Championship”, explained Éric Couture, Tournament Director at Golf Québec. “Last year, Baptiste Mory of Royal Québec had won the event with a score of 277, and he had to earn his title in a sudden-death playoff as well.”

Michael von Schalburg of the York Downs Golf & Country and Étienne Brault of Pinegrove tied for third with -6 (278). Likewise to von Schalburg who scored 72 (+1), the final round of the tournament was the only one in which Brault was unable to play under the par as he registered a card of 73 (+2). 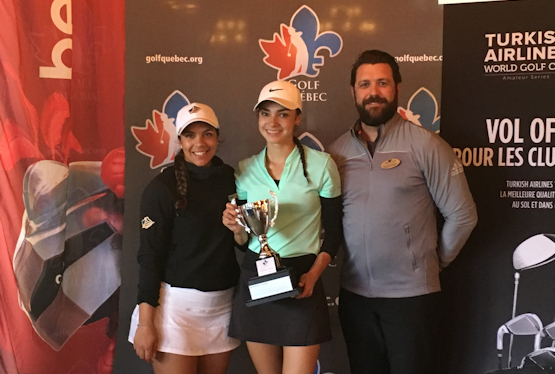 In the women’s division, Laurence Lamer of Rosemère earned the title with a cumulative score of +22 (306). Even if she had to fight to maintain her place on top of the provisional ranking, her path to mount the podium turned out to be easier than expected for the new U25 champion. In the facts, Camille Lapierre-Ouellet of Château-Bromont was disqualified from the final round as she registered a wrong score earlier this week. Up to her disqualification, she had been only one stroke behind the leader.

“The incident completely changed the scenario and opened the way for Laurence who was able to capture the victory despite a score of 81 on the last day of the event,” mentioned Mr. Couture.

While Laurence Lamer started the competition with a 6-stroke lead on her closest rival, Annie Lacombe of Le Blainvillier, the disqualification of Lamer provided her with a much more comfortable advance on the field. Lacombe who has won the recent Debbie Savoy Morel Cup and Provincial Match Play Championship finished 4th overall, mostly due to her final round of +13, this Thursday.

Tied for second are Rose Morissette of Le Blainvillier and Béatrice Grisé of Pinegrove who both finished at +30 (314). While Morissette played +6 (77) in the final round, Grisé registered the best score of the day with +3 (74).