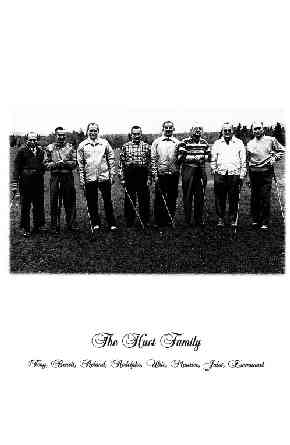 It would be almost impossible for an individual to have single-handedly changed the face of golf in Québec, but it is safe to say that Jules Huot definitely played an important role in the future success in this province.

While Québec might have given birth to golf in North America, its popularity was somewhat limited by the lack of interest in the French speaking population, that is until he rocked the nation by capturing the 1934 Canadian Professional Golfers’ Association championship.

Huot was the first French-Canadian golfer to become a national figure. Born January 7, 1908 in Boischatel, he entered the world of golf as a caddie at the Royal Québec Golf Club, which was located across the street from his family’s home.

The second son of one of the largest and successful golfing families, Huot used the money earned to help support his family. He eventually moved into the proshop as an assistant to Frank Locke and so impressed his mentor that Locke entered him in the 1924 Québec Open. He was all of 16 years-old.

Two years later, he moved to the Lac St. Joseph Golf Club. The following season, he went to the Kent Golf Club where for three years – 1927 through 1929 – he served as the course superintendent before becoming its head professional in 1930 – earning the title as the first Québecer to hold this position. Fifteen years later, in 1945, Huot moved to the prestigious Laval-sur-le-Lac Golf Club, where he remained until his retirement in 1970.

Huot’s success as a club professional paled by comparison to his illustrious career on the links. In all, Huot amassed 17 victories and numerous runner-up crowns. They include:

Huot’s highly emotional and unexpected victory over Harry Cooper in the General Brock and his leading in the third round of the 1937 Los Angeles Open, despite suffering from the flu, are two of his most memorable tournaments that brought him world-wide recognition.

With the advent of the professional circuit player including the likes of Cooper, Ralph Guldahl, Byron Nelson, Craig Wood, Sam Snead and Ben Hogan, Huot’s success in these two PGA events were almost unheard of, particularly because as he said, “I was a club professional”.