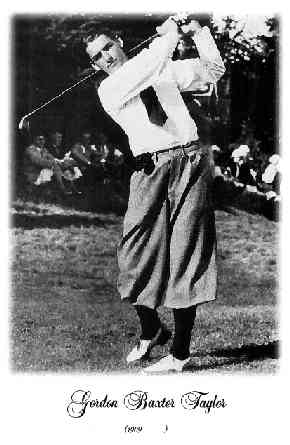 Gordon B. Taylor was dubbed “one of the boys of ‘32” and with that title came the promise that provincial and amateur championship crowns would be shared amongst the dozen or so players which made up this group.

It was a heavy burden to bear, but Taylor and the others fulfilled that promise and then some.

Taylor, born in Montréal on October 10, 1909, was a multi-talented athlete who played football and basketball while excelling in hockey, including playing for the Montréal Royals. He was also a Québec diving champion and considered a prospect for the Olympics.

Taylor’s first competititve golf victory came as a member of the 1930 Québec Willingdon Cup Team. The following year, on June 30, 1931, playing his home course of Kanawaki Golf Club, he set the competitive course record of 65.

Taylor scored his first individual major championship title by knocking off an elite group of golfers in the 1932 Manoir Richelieu Shield tournament. Several weeks later, Taylor, virtually unknown to golf fans outside of province, repeated that feat in the 1932 Canadian Amateur Championship.

According to news reports of the time, it wasn’t so much winning the tournament that placed him amongst the titans of amateur golf but the manner in which he played. His seemingly effortless swing and his tremendous distance and control from the tee attracted much attention.

The 1934 Québec Amateur champion also garnered the low Amateur crown in the 1935 Canadian Open and was a member of the 1935 Canadian team that competed in the United-Kingdom. That same year saw the birth of the Duke of Kent championship. The timing of the inaugural event just happened to coincide with Taylor’s arrival from the United-Kingdom. Despite the rigors of travel, Taylor headed to the course and won.

Golf for Taylor was put on hold during the Second War. As a soldier in the infantry, Taylor fought in Normandy and sustained a wound to his left arm.

The injury obviously had little lasting effect on the strength of his game. The durability of his swing is evident by his winning the club championship at Kanawaki in 1931 and some 50 years later the club title at MountBruno.

Taylor was captain of the Canadian team that competed in the first Commonwealth Golf Tournament in 1954 and competed on numerous provincial and international teams.

As a senior, Taylor represented Canada many times in the Senior Matches against the U.K. and U.S.A., captaining the team in 1964. He twice won the Canadian Seniors Golf Association Championship (1966 and 1968) as well as a Québec Senior Championship crown (1967).

Taylor also distinguished himself by dedicating more than 50 years of service with provincial and national golf association’s boards. He served as president of the QGA in 1949 before ascending to the national scene the following year, serving as an RCGA governor from 1950 to 1964 and as its president in 1959. From 1965 through 1977, he worked on the RCGA’s advisory board and was named an Honorary Life Governor in 1978. He was also affiliated with the Canadian Seniors Golf Association and its president in 1978 and 1979.