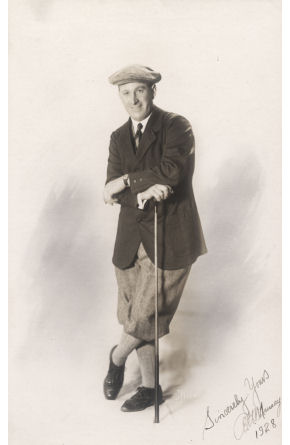 Albert Murray’s legacy goes well beyond his holding the record as the youngest golfer ever to win the Canadian Open Championship; he also left his mark on many of the finest clubs around this province.

Murray, born September 3, 1887, in Nottingham, England, was only eight months old when his family immigrated to Canada. The younger of two brothers that proved outstanding in competitive golf, Murry joined the ranks as a caddie in 1897 at the Toronto Golf Club.

The following year, he joined his brother, Charles, at the Westmount Golf Club and their association continued when Charles moved to Royal Montreal in the 1905.

In 1906, at the age of eighteen, Murray was hired to remodel the Royal Québec Golf Club at Cove Fields and take over the roll as head professional. While his stay at the club was short lived, it was not forgotten. When the members were forced to relocate after the 1915 season, they commissioned him to lay out the club’s new course at MontmorencyFalls.

In 1908, Murray went to the Outremont Golf Club. With the ever increasing encroachment of new housing development in the area, the members sought an alternate sight and formed a new club at Kanawaki. Murray, along with his brother, designed the layout and he was employed as the new club’s first professional in 1913.

The 1921 season saw Murray move to the Country Club of Montréal. Five years later, he began an association with the Beaconsfield Golf Club that would last for sixteen years.

Upon his retirement from the club professional’s role in 1942, Murray devoted most of his time to golf course design. In all, some thirty-three clubs were designed and an additional thirty-four remodeled by him including, Laval-sur-le-Lac, Grand-Mère, Kanawaki, Val-Morin, Whitlock, Malone in the state of New-York, Edmunston in New-Brunswick, and Knowlton, to name but a few – some of these are no longer in existence and others have been modified or redesigned since.

While Murray was widely recognized for his fine work in golf course design and as a club professional, he also amassed a tremendous collection of antique memorabilia and shone on the golf course. Some of his many accomplishments include:

·Winning the Canadian Professional Golfers’ Association’s Championship at Beaconsfield in 1924 and was runner-up in the first two years of the event (1912 & 1913).

·Launching Canada’s first indoor golf school in the basement of Montréal’s Ritz-Carlton Hotel in 1916, that operated for 25 years.

Murray’s tremendous contributions to the game were recognized by his election into the Canadian Golf Hall of Fame in January of 1974. It came one month prior to his death at the age of 86.