Proud of its 100th anniversary, Golf Québec offers you a series of articles that will serve to promote its history as well as highlight its builders and key events. At the end of 2020, these columns can be grouped together to form a souvenir program. 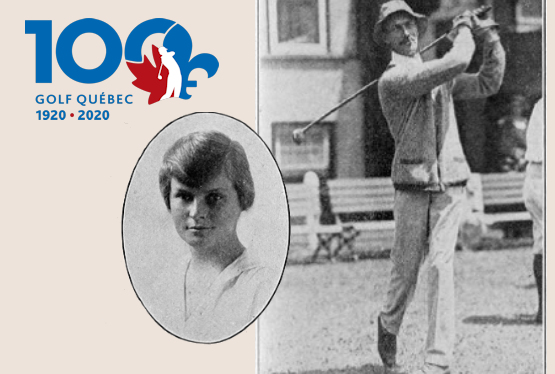 As we have seen in the previous column, it is from April 5, 1920, that the Province of Québec Golf Association (PQGA) became the only organization to control the sport of golf in the province. Its double objective was to unite Québec golf clubs so that they could take advantage of the governance and development services provided by the Association and organize tournaments.

In doing so, the annual provincial championships were held for the first time at the Country Club of Montréal in Saint-Lambert, which included the Québec Open and Québec Men’s Amateur. The two days of competition on June 18 and 19, 1920, were a success with 164 entries in four distinct categories.

The first day was attended by 12 professionals, 7 assistant professionals and 48 ladies. The Gazette newspaper reported that the course was in excellent condition, ready to welcome the participants for a challenge worthy of major championships. Mother Nature even brought her " typical Scottish " touch to the course with a pleasant breeze, a beautiful brightness and a sky heavy with clouds which, of course, ended up wetting more than one person at the end of the day.

Among the professionals, the honour went to Arthur Woodward of the host club with rounds of 74 and 76 played in one day. Three players finished within two strokes of the champion and a nine-hole overtime was scheduled to determine the second place, in addition to the 36 regulation holes, all in the same day! Charlie Murray of Royal Montreal prevailed with a score of 37 ahead of Karl Keffer of Royal Ottawa (38) and Albert Murray of Kanawaki (42). Interestingly enough, they are now all inducted into the Québec Golf Hall of Fame!

In the assistants' category, William Mulligan of the Royal Ottawa won by a roaring 18-shot lead with rounds of 82 and 87. There is no indication that he was related to David Mulligan of the Country Club, to whom some attribute the origin of the famous golf "mulligan".

Ms. Frank Ahearn of the Royal Ottawa won in the woman division, which also contributed to her team's victory in a competition involving nine teams of four players from seven different clubs. Her score of 90 was the best score ever achieved by a woman at the Country Club!

Miss Molly McBride caught the attention of the many spectators in attendance by winning the long drive competition with three tee shots of 196, 187, and 188 yards. There was also a chipping and putting competition won by Mrs. Hamilton Irwin of the Royal Montreal with a score of 9. It is amusing to see the evolution of morals in our society as married women of the time were still identified by the name of their husbands.

The next day, Beaconsfield veteran T. B. Reith became the province's first amateur champion of this new era with rounds of 80 and 76. This victory was in addition to his 1914 victory when he dominated the City & District of Montréal's championship. It was the Royal Montreal No. 1 foursome that won the 10-team competition. Note that we are still looking for the scorecards of 14 of the 94 players who teed off that day! The newspaper coverage was very extensive at the time, and The Gazette of June 21, 1920, gives the hole-by-hole scores of all the players who handed in a card, much to the chagrin of Mr. Brault of Laval, who scored 14 on the 4th hole on his way to a score of 244 for 36 holes.

The youngsters were not to be forgotten as the first Junior Championship was held in 1923. We will have the opportunity to come back to this in a future chronicle.