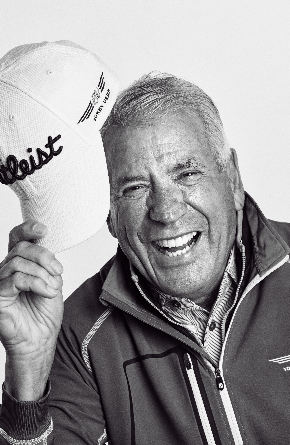 
Born in Montréal and raised in Verdun, Québec, Vokey has become one of the world’s foremost wedge designers and trusted short game advisor to many of the modern game’s greatest golfers.

"What an honour to be recognized by the Québec Hall of Fame," said Vokey when informed while working the PGA TOUR's Farmers Insurance Open in January. "I never imagined in all my years that this great honour would come my way. It's incredibly humbling to be honoured with so many great golfers and contributors to the game of golf in Québec and Canada."

While his career in golf equipment design has also touched on iron and metal wood technology, his most influential impact on the sport has come through Vokey Design wedges which continue to be trusted by many of the game’s great players and are best sellers among golfers of all skill levels.

Although the commercial success of the Vokey franchise is exceptional, his innovation and passion to help golfers of all ability get more enjoyment from their golf experiences are a hallmark for his contributions to the sport.

Bob Vokey was born in 1939 in Montréal, Québec. and credits his early inspiration in club design to the summers he spent with his father, a fine tool and die maker who had a penchant for golf and enjoyed tinkering with equipment.

He was a three-sport athlete in hockey, baseball, and football growing up and his talents on the football field led to a professional stint with the Québec Rifles of the United Football League as a punter, receiver and safety. He moved to Southern California in 1965 to work for AT&T laying telephone lines and it was during this time that he developed a passion for golf and the tools required for golfers to play their best.

In 1976, he pursued his passion by opening Bob’s Custom Shop which offered club building and repair services. From there, it didn’t take long for the ‘Bob Vokey’ name to become synonymous with craftsmanship within the South California golf community.

In 1986, he joined TaylorMade as their primary club builder in the company’s Tour department. It was during this time that he developed relationships with players such as Lee Trevino, Seve Ballesteros and Mark O’Meara.

In 1991 he joined Founders Club and continued to gain the trust of the game’s greats including Lanny Wadkins and Peter Jacobsen with performance products that included the TV-1 Irons, Founders Forged and Fresh Metal Plus metal woods.

In 1996, the lead club designer at Titleist, Terry McCabe, asked Vokey to join him in the R&D and Tour Departments. His first project at Titleist was assisting with the final design of the Titleist 975 driver, which quickly became the No. 1 driver in play on the PGA Tour in 1996.

Shortly thereafter, Titleist CEO Wally Uihlein entrusted Vokey with the task of driving the company’s wedge business. The 456.14 wedge was the first Vokey Design wedge in play on the PGA Tour when it debuted in the summer of 1997 and introduced to the consumer market in 1998.

Vokey’s innovation with wedge design introduced popular concepts such as bounce and grind into golf equipment lexicon. The 400 series Vokey Design wedges delivered the finest in product design and committed service to the world’s best players and were complimented by 200 and 300 series wedges from 2000 to 2004. In 2004, Vokey Design wedges became the No. 1 wedge in play on the PGA Tour, a distinction of excellence that continues today.

In 2005, Vokey’s innovation introduced the Spin Milled groove cutting process, which ultimately led to Vokey Design wedges becoming the No. 1 wedge in the world’s largest consumer market, the United States, in 2009, a market leadership position it has held now since 2011.

Vokey and his design team continue to focus on innovation and in 2016 introduced ‘progressive centre of gravity’ to the wedge category with the Spin Milled 6 models. The technology represented another leap in wedge design from custom sole grinds, to spin milled grooves and centre of gravity precisely positioned based on loft. Each innovation to this day is grounded in Vokey’s commitment to the golfer, and his mission to deliver the best in wedge play performance.