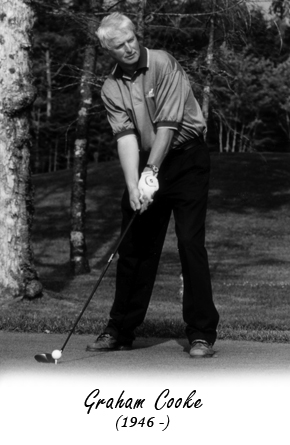 Graham Cooke (1946 - ) Inducted in 2008
Graham Cooke is, without a doubt, an accomplished amateur golfer, and the list of the championships that he has won at all levels of competition is highly remarkable.
On the provincial scene, he won the Amateur Championship 4 times, the Senior Championship 2 times, and the first edition of the Tournament Players’ Championship in which the trophy is named after him! He also won the Alexander of Tunis 4 times, and the Duke of Kent 5 times. These achievements led him 27 times to be a member of the Québec Team in the Willingdon Cup competition, which he won twice.
At the Canadian level, he is the only person to have won the Mid-Amateur Championship 7 times, and he was crowned 3 times at the Senior Championship. As well, he was a member of 7 Canadian Amateur teams. He took part in numerous prestigious international competitions, including the 2007 Seniors’ Open Amateur Championship, in Scotland, where he ranked 2nd after a sudden-death play-off.
Since 1973, he has his own golf course design company, Graham Cooke & Associates, and has designed and overseen the construction of over 100 golf courses as well as providing services for over 600 clients located around the world.