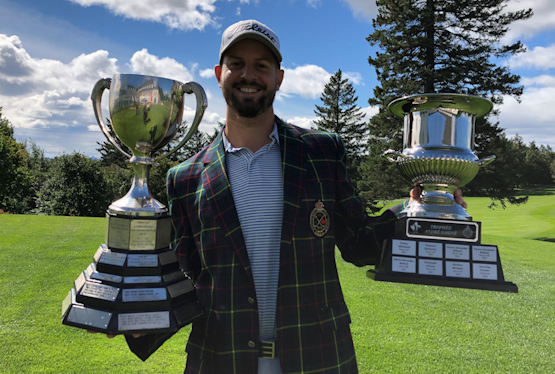 Get the complete results - Duke of Kent

Montréal, September 14, 2020 – The Royal Québec Golf Club was host this Monday to the Duke of Kent presented in collaboration with Turkish Airlines and belairdirect. The event was the last of the three legs composing the Men’s Triple Crown. Due to the current pandemic, it was held over 18 holes for the first time since its inception, in 1935, instead of its traditional two rounds. Nonetheless, the 120 participants were able to enjoy one of those beautiful cool days heralding the return of the fall season despite significant gusts of wind which certainly added to the challenge of the course.

Interesting fact to note this year, we had the opportunity to see a father-son duo evolve for the third time in the history of the Duke of Kent. A member of the host club, René Forgues had made a promise when William was born eighteen years ago that he would one day play with his son in this high-level competition. Against all odds, he kept his promise! Meanwhile, Olivier Daneau (Club Laval-sur-le-Lac), who had a similar experience with his father a few years ago, played the par today to tie for sixth.

The Golf Québec team would like to thank the Royal Québec Golf Club, its General Manager, Mario Bouchard, its members, and the volunteers of the Boischatel area who made this event possible.

There is only one tournament left to complete the 2020 competitive season. This year, the Spring Open which normally launches the season will be used to close it on this Friday, September 18, at the Beaconsfield Golf Club. Traditionally, the best amateurs who are members of Golf Québec will compete against an impressive contingent of professional golfers. The 2019 champion, professional Yohann Benson (Club Laval-sur-le-Lac), who successfully defended his Bromont Invitational title this summer, will have to compose with Étienne Brault (Pinegrove) who won the amateur title in a sudden-death playoff last year before turning professional.

In 2020, Golf Québec was proud to count on the collaboration of Turkish Airlines and belairdirect for the presentation of the Men's and Women's Provincial Tours. Tournaments composing the Provincial Junior Tour were also presented in collaboration with Turkish Airlines. In addition, the Golf Québec volunteers, referees, and employees were dressed by adidas throughout the golf season. Competitors were also supplied with the official TP5 and TP5X golf balls offered by TaylorMade in main provincial events.