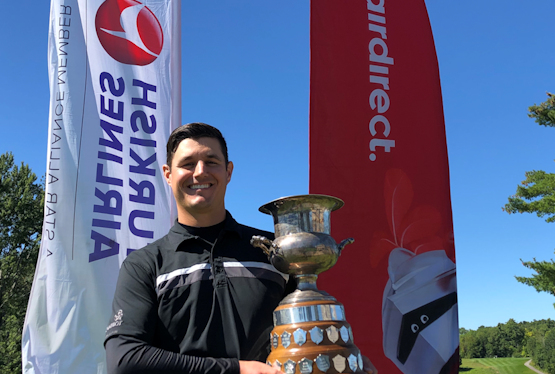 Thomas Westfall captured the victory at the Alexander of Tunis

Get the complete results - Alexander of Tunis

Montréal, August 31, 2020 – The Camelot Golf and Country Club was host this Monday to the Alexander of Tunis presented in collaboration with Turkish Airlines and belairdirect. Second leg of the Men’s Triple Crown, the event was held over 18 holes instead of two rounds for the first time since its inception, in 1950, due to the current pandemic.

Thomas Westfall, a member of the host club, was the first to tee off this morning at 7:30 a.m. The course advantage playing in his favour, he took control of the event with a score of 67 (-5) including six birdies and only one bogey.

"I'm very excited to win my first ever provincial tournament. I haven't competed in an event of this magnitude in several years," said Thomas Westfall. "The last time I competed at the provincial level, at Camelot, I was still a junior. I remember playing 68 in the first round of that tournament and when I teed off this morning I felt exactly how I felt 17 years ago. It was a good omen!" added the champion.

One will remember that young Malik Dao (Summerlea) has already won the first leg of the Men's Triple Crown, the Men's Provincial Amateur Championship, presented earlier in the season. With Thomas Westfall claiming the victory at the Alexander of Tunis, today, we can already confirm that the Men's Triple Crown is still not conquered after 70 years!

The Golf Québec team would like to thank the Camelot Golf and Country Club, its members, and the Ottawa Valley volunteers who made this event possible.

The 2020 golf season has been very special and is now coming to an end. Over the next few weeks, Golf Québec will conduct the last men's provincial tournaments presented in collaboration with Turkish Airlines and belairdirect, beginning with a qualifier for the Spring Open to be held on September 8 in Rosemère.

Then, the last leg of the Triple Crown, the Duke of Kent tournament will be played at the Royal Québec Golf Club on September 14. Like the Alexander of Tunis, this tournament, which has a rich history dating back to 1935, will feature only one round for the very first time instead of its regular two rounds. Émile Ménard (Pinegrove) will be there to defend the title he won in 2017 and reclaimed in 2019.

Finally, the Spring Open, which normally launches Golf Québec's competitive season, will be used this year to close it on September 18 at the Beaconsfield Golf Club. Traditionally, the best amateurs who are members of Golf Québec will compete against an impressive contingent of professional golfers. The 2019 champion, professional Yohann Benson (Club Laval-sur-le-Lac), who successfully defended his Bromont Invitational title this summer, will have to compose with Étienne Brault (Pinegrove) who won the amateur title in a sudden-death playoff last year before turning professional.