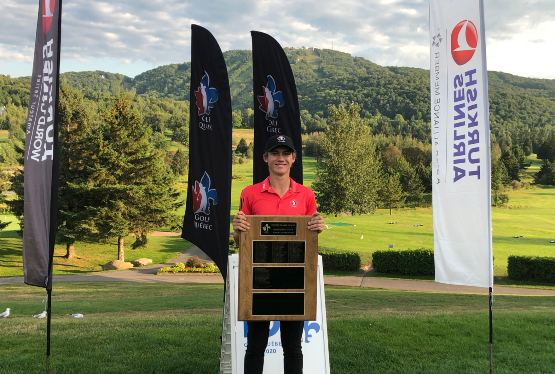 Montréal, August 23, 2020 – The Provincial Junior Boys’ Championship was presented this weekend at Golf Château-Bromont in collaboration with Turkish Airlines. On August 22 and 23, the event gathered 120 young golfers from the Junior, Juvenile, and U14 categories.

From the first round where he took the lead at -7, the 2019 Juvenile Champion Hugo Denis (Le Mirage) made it clear that he intended to take the Junior Boys' title this year. His closest rival, Team Canada's Jean-Philippe Parr (Ki-8-Eb), was two shots behind him after making a hole-in-one at 11th. By doing so, he took the lead in the Juvenile competition. At the dawn of the final round, Malik Dao (Summerlea), 2020 Amateur Champion and Team Canada member, shared third place with Guillaume Paquette (Gray Rocks), Yaorui Xu (Ottawa Hunt) and Alexis Clément (Drummondville) at -3.

After a few showers in the morning, it was finally under a blazing sun that the leaders teed off. This beautiful temperature benefited Jean-Philippe Parr, who quickly found his comfort zone to bring back a final score of 70 (-2). This allowed him to win the provincial titles in both the junior and juvenile categories.

"Today (Sunday), I wanted to have fun and focus only on my game. I hit an eagle on the sixth hole and that gave me some momentum. After that, everything was going pretty well for me and I was able to catch up with Hugo (Denis) to win the title. I'm very happy with the result!" said the 16-year-old, who completed his tournament at -7 (137).

His good friend Hugo Denis played a final round of 74 (+2) and tied for second with Alexis Clément. Both concluded the tournament with a cumulative score of 139 (-5).

Meanwhile, Malik Dao and Yaorui Xu respectively placed second and third in the juvenile category. Dao concluded the competition at -3 (141), while Xu showed a record of -1 (143).

The Golf Québec team would like to thank Martin Ducharme and his team at Golf Château-Bromont who made this event possible by preparing the most exceptional course to challenge our competitors.

The Golf Québec team is now heading to Elm Ridge Golf and Country Club where the Men's Match Play Championship will be presented from August 24 to 27 in collaboration with Turkish Airlines and belairdirect. The event will feature 48 amateur players who will try to get their hands on the title that Étienne Papineau (Pinegrove) won in 2018 and 2019, but unfortunately cannot defend this year due to an injury. In the senior division, 16 competitors will also be vying for victory in the absence of 2019 champion Serge Amyot (Summerlea).