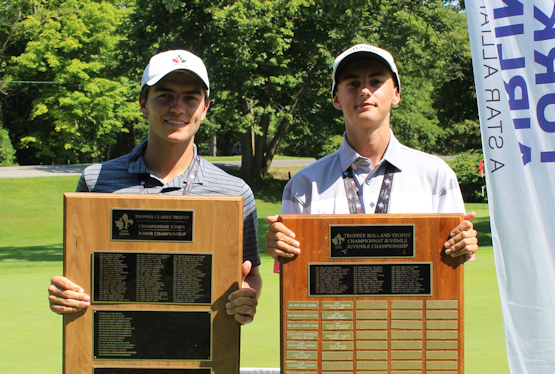 Rockland, ON, August 1, 2019 - William Duquette (Club Laval-sur-le-Lac) and Hugo Denis (Le Mirage) had to face off in a sudden-death playoff, this Thursday, to determine who would be crowned as the overall winner of the Provincial Junior Boys’ Championship presented by Daigneau, eau de source naturelle in collaboration with Turkish Airlines. Despite his amazing come back, Denis was defeated on the first additional hole.

Leader of the event after completion of the third round, William Duquette played the par (72) to register and overall score of -3 (285). However, Hugo Denis, a juvenile player, made a major come back in the ranking with a spectacular score of 66 (-6) which created a tie for the title.

After confirming everyone’s performances, the organizers invited the two young men to compete in a playoff on hole #8. Denis took his tee shot first and his ball landed on the right of the green, which opened up a world of possibilities for Duquette who played confidently to keep the odds in his favour.

“This morning (Thursday), I did not use the right club to play on this hole, so I knew exactly what to do this time. I reached the green and felt that I really had a chance to win,” explained the Laval athlete who completed a very successful week by making the par for the title.

“I almost made a birdie! In the end, with two great putts in a row, I was able to capture the victory. Altogether, it was a good tournament. I had a lot of fun and I am very proud of the outcomes.”

All is not lost for Hugo Denis

Despite the fact that he lost the playoff, Hugo Denis still has several reasons to rejoice and celebrate his final round. The young 16-year-old golfer registered the best performance of his life and, as a result, proudly left Rockland with the Québec juvenile title.

“Obviously, it is kind of sad to lose, but I am still very proud of today’s score and my overall achievements in this tournament. This morning, I would never have dreamt of catching up with the leaders, so it really is an excellent performance,” mentioned Denis who quickly picked up the pace in this final round.

“I started with a birdie on the first hole. This filled me with confidence for the rest of the day. I was able to make quite a few birdies and it finally dawned on me that I could catch up with the leaders. This is such a great experience and I am very proud.”

Just like Duquette and Denis had to face in a duel, the competition was also quite fierce for the third place of the overall ranking. At the end of the day, the 2018 champion, Logan Boucher (Summerlea), stood out of the crowd. He concluded the event at +1 (289) with a mere 1-stroke lead on his fellow competitors William Forgues (Royal Québec), Frédéric Rousseau (Pinegrove), and James Newton (Royal Ottawa).

The Québec Team is appointed

By ranking third in this event, Logan Boucher secured the first place on the Order of Merit for the Québec junior quota. By doing so, he earned the right to represent Golf Québec at the Canadian Junior Boys’ Championship to be held at the Covered Bridge Golf & Country Club, in Hartland, New Brunswick, from August 11 to 15, 2019.

Boucher will team up with Christopher Vandette (Summerlea) and Laurent Desmarchais (Vallée du Richelieu) who were guaranteed a place on the Québec formation as they are members of the Team Canada Junior Squad.

Golf Québec is now heading to the Drummondville golf club where the Provincial Bantam, Pee-Wee, and Mosquito Championship will take place. The youngest golfers of the province, boys and girls, will attempt to capture the title of their respective categories in a two-round event to be held next Monday and Tuesday.