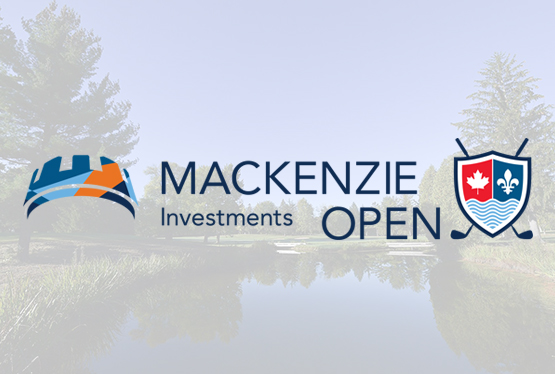 Montréal, Québec – Golf Québec has signed a multiyear partnership with the Mackenzie Tour – PGA TOUR Canada, which will see the Provincial Sport Organization assume control of the Mackenzie Investments Open, the penultimate stop on the Mackenzie Tour schedule. In collaboration with the PGA of Québec and Québec Golf Course Association, the event will take place September 2-8 at Elm Ridge Country Club in Île Bizard, QC.

Golf Québec is the governing body of golf in the province, providing leadership and promoting the growth and development of amateur golf throughout Québec while preserving the integrity and traditions of the game. Led by Executive Director Jean-Pierre Beaulieu.

“Golf Québec is the perfect partner for us in the province of Québec and we would like to thank their board of directors for their commitment to the Mackenzie Tour,” said Scott Pritchard, Mackenzie Tour Vice President. “Jean-Pierre and his team are experts in executing professionally run golf tournaments and we are extremely proud to be partnered with such a great organization.”

Golf Québec will also receive support in operating the tournament from its provincial golf partners: the PGA of Québec, led by Dominic Racine, and the Québec Golf Course Association, led by David Skitt. Both Racine and Skitt are no strangers to PGA TOUR competitions. Racine is a former Mackenzie Tour rules official and has assisted in operations for a number of PGA TOUR sanctioned events. Skitt is a former Mackenzie Tour tournament director, also serving in the role on PGA TOUR Champions in Montréal, Québec City and Victoria, B.C.

The CHU Sainte-Justine Foundation will continue to be the official charity of the tournament. In 2018, the Mackenzie Investments Open raised nearly $30,000 for the foundation’s Healing More Better Campaign, focusing on the advancement of state-of-the-art research to help heal more children.

“Golf Québec is honoured to partner with the Mackenzie Tour, but ultimately we are most excited to provide playing opportunities to the top players of the province in an international field,” said Jean-Pierre Beaulieu, Executive Director of Golf Québec.

The Mackenzie Investments Open began in 2017 in Montréal, which was highlighted by current PGA TOUR player Hank Lebioda’s first Mackenzie Tour victory. Lebioda went on to earn Korn Ferry Tour status in 2018 and parlayed that into PGA TOUR status for 2019, where he currently sits in 124th position in the FedEx Cup race.

“We are thrilled that Golf Québec has partnered with the Mackenzie Tour to run the Mackenzie Investments Open,” said Barry McInerney, Mackenzie Investments President and CEO. “We are fully confident that the organization will not only put on a first-class professional golf event for the community but will also continue to thrive when it comes to the tournament’s charitable initiatives.”

The 2019 Mackenzie Investments Open will be comprised of a field of 144 players. Following the tournament, the top-60 players on the Order of Merit will earn a spot in the following week’s Canada Life Championship, the final event of the season which grants Korn Ferry Status to the top-10 player on the Order of Merit. A select number of sponsor exemptions will be awarded to Québec based players, which will be announced at a later date.

Tournament volunteers are required in a variety of committees, assignments and positions. The enormous effort put forth by volunteers will allow the tournament to donate proceeds to our respective charitable partners, while at the same time providing a fun and exciting experience for each volunteer. For more information on volunteer opportunities, please contact; Éric Couture, Tournament Operations Director, ecouture@golfquebec.org, 514 252-3345, ext. 3594.

The Mackenzie Tour - PGA TOUR Canada is a series of tournaments played across Canada each summer, where tomorrow’s stars begin the path to the PGA TOUR. The leading five money winners at the end of each season earn status on the Korn Ferry Tour for the following year. The Tour’s alumni include 31 PGA TOUR players and 200 Korn Ferry Tour players since 2013. The Mackenzie Tour’s mission is to deliver a PGA TOUR experience for its members, fans, volunteers and partners in order to develop the future stars of professional golf and enrich the communities it visits.

About PGA of Québec

The PGA of Québec is comprised of nearly 400 golf club professionals. The members include golf industry experts such as respected Golf Club Executives, passionate golf instructors, and talented players. The PGA of Québec supports the members in their career paths, promote their value within the golf industry, and help grow the game of golf in Québec. https://www.pgaquebec.com/

About The Québec Golf Course Association

The Québec Golf Course Association (ACGQ) is a not-for-profit association, owned and governed by its membership, providing business support to golf course operators and related stakeholders in the province of Québec. From providing effective networking opportunities for golf club General Managers, to continued education training on the business of golf, to collaborating with our institutional partners through cooperative marketing strategies, the Québec Golf Course Association is an active industry player that defends, promotes and encourages the growth of the game. Please visit our website at acgq.ca.