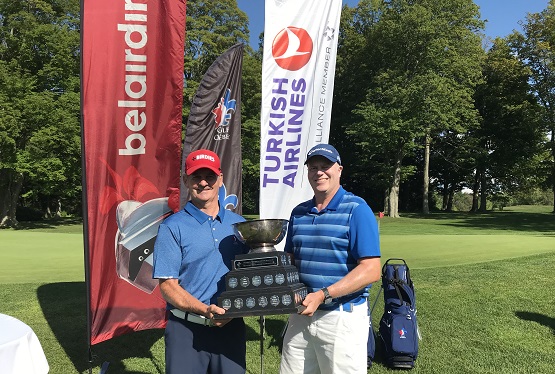 See all the results here

Cowansville, August 14, 2019 – Jean-Guy Garnier finished in the top spot on the leaderboard at the Men’s Senior Provincial Championship, which was presented by Turkish Airlines in collaboration with belairdirect at the Cowansville golf club on Wednesday. It was his second provincial title, the first having been in 2015 at Lac-Saint-Joseph.

The golfer from the Royal Québec club held the lead throughout the final round and shot a 74, finishing his three rounds with a total of 216, which left him three shots ahead of Peter Harrison (219, Ottawa Hunt) and four ahead of Serge Amyot (220, Summerlea).

Garnier now succeeds the 2018 champion, Shawn Farrell (Summerlea), who made his mark last year at the Bic course.

For Quebec’s new champion, his second round was the clincher. He had the best score of the tournament with 67 shots (5 under par) thanks to six birdies.

“We had more participants than usual. In fact, we had 120, which is the maximum. Luc Labbé, the general manager of the Cowansville club, who has never really taken part in competitions, placed fourth (221) in the tournament. Also, Luc Guilbault (public player) shot a hole-in-one on the 14th hole (par 3) during the first round,” observed Diane Bruneau, Tournament Coordinator for Golf Québec.

The members of Quebec’s team have now been named

In keeping with tradition, the top three golfers from this provincial tournament will represent Quebec at the Men’s Canadian Senior Championship. 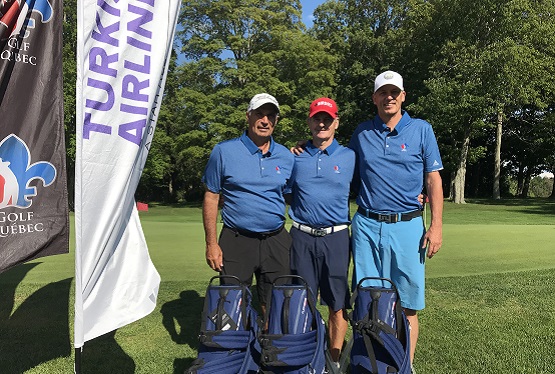 As such, Jean-Guy Garnier, Peter Harrison and Serge Amyot will head to the Cedar Brae Golf Club in Scarborough, Ontario for the tournament, which will be held from September 9 to 13.

The Golf Québec team is now pursuing its preparations for the 24th edition of the Junior Provincial Match-Play Championship. That tournament, which is part of the Junior Provincial Circuit, will be presented by Daigneau, eau de source naturelle in collaboration with Turkish Airlines. It will take place at the Knowlton Golf Club from August 19 to 21.

Quebec’s golf enthusiasts are also invited to attend the Generations’ Provincial Championship and the Provincial Mixed Tournament, two recreational tournaments that will held on August 19 at Le Blainvillier.