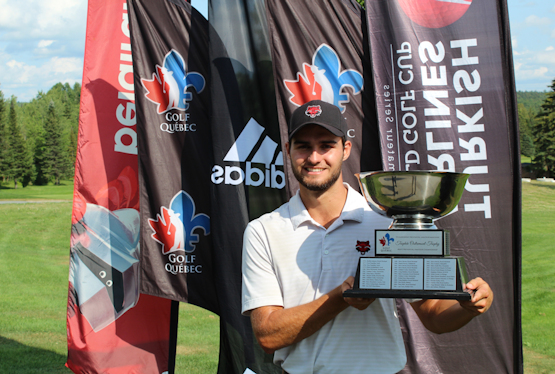 Montréal, July 25, 2019 (Sportcom) – Julien Sale (Rivermead) can proudly say, “mission accomplished”. This Thursday, the Gatineau golfer was crowned at the Men’s Provincial Amateur Championship presented by Turkish Airlines in collaboration with belairdirect and captured the only title of the Triple Crown that was still missing to his personal record.

In 2018, Sale had won the Alexander of Tunis and Duke of Kent to finish two-stroke short of the victory at the Men’s Provincial Amateur Championship. This year, after successfully defending his title at the Alexander of Tunis, at the beginning of July, Sale did not compete in the Duke of Kent. Otherwise, he could have become the very first player in history to ever register a hat-trick at the Triple Crown.

Nonetheless, he won two of the three prestigious events, two years in a row. From the very first round, this Monday, Sale took the lead of the field at Club de golf Beauceville where he played 64 (-8). Maintaining the pace, he registered rounds of 65 (-7) and 69 (-3) to set a comfortable 6-stroke lead on Christopher Vandette (Summerlea) and Étienne Brault (Pinegrove).

“The day went fairly well. I experienced some difficulties at the beginning, but stayed patient throughout the round and finished very well,” explained Julien Sale at the end of the competition.

Even if he was able to protect his lead, Vandette and Brault were fierce competitors and gave him a hard time. The Summerlea player started the day with a roar, making five birdies on the first five holes. After the front nine, this brought him to trail behind the leader with a mere 3 strokes to catch up.

“I think that the momentum was on my side at the beginning of the day,” declared Vandette. “Due to a few concentration errors on the back nine, I missed a few putts. Overall, I’m still satisfied with today’s performance.”

Meanwhile, Julien Sale was able to get back in the game and finish strong. Experience told him that he would have opportunities to catch up on some of the last holes on the Beauceville course.

“At the beginning of the day, I was quite aware that my rivals would catch up to me, but that did not bother me. I figured that, if I did not make mistakes and maintained the pace of the three other rounds, everything would work out in my favour,” he mentioned. 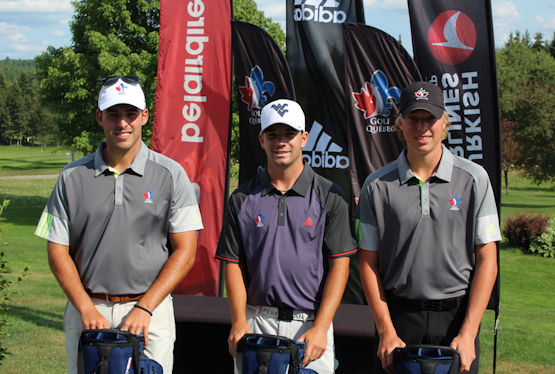 The Men’s Provincial Amateur Championship was the final leg of the Triple Crown in which some players stood out and collected enough points to earn their place on the Québec men’s amateur team. Étienne Papineau (Pinegrove), Étienne Brault, and Olivier Ménard (Whitlock) will represent the province at the Canadian Men’s Amateur Championship to be held in Nova Scotia, from August 5 to 8, at the Glen Arbour Golf Club, in Hammonds Plains.

As they all participated in the three events composing the Triple Crown - the Alexander of Tunis, Duke of Kent, and Men’s Provincial Amateur Championship -, Papineau (13,380 points), Brault (12,357.50 points), and Ménard (11,630 points) are on top of the Triple Crown Order of Merit.

The complete group of 20 Québec golfers that are eligible in the provincial quota for the individual Canadian competition is not fully known yet as we still need to determine who will be available to compete in Nova Scotia or not.

At the moment, Julien Sale confirmed that he will be in attendance and he is hoping to be as successful as this week. “I am very satisfied to see how my game has improved and I just can’t wait to see if I will play as well in the upcoming tournaments. I hope that I will be able to maintain the pace,” he concluded.

Written by Sportcom for Golf Québec